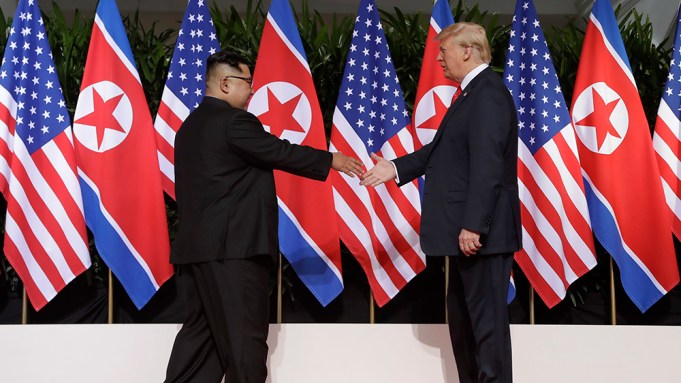 President Trump shook hands with Kim Jong Un at the start of a first-of-its-kind meeting of a sitting U.S. president and a North Korean leader.

Against a backdrop of U.S. and North Korean flags, the two first shook hands for about 12 seconds, and Trump at one point grabbed Kim’s arm as they posed for pictures. They did not smile, but moments later exchanged grins and another handshake as they stopped in a colonnade on their way to a nearby room for their first one-on-one meeting.

A few minutes later, as he first sat with Kim, Trump told reporters, “We will have a terrific relationship, I have no doubt.” He predicted that the summit will be “really successful.”

“The old prejudices and practices worked as obstacles on our way forward, but we’ve overcome all of them and we are here today,” Kim said.

Their meeting, with only translators present, lasted 38 minutes. According to a pool report, as they walked along a freeway afterward, Kim told Trump that “many people in the world will think of this as a (inaudible) form of fantasy…from a science fiction movie.”

The event at Sentosa Island in Singapore, starting around 9 a.m. Tuesday local time, was a sharp reversal from the rhetoric between Trump and Kim for much of last year and into early 2018, as each mercurial figure engaged in name calling and provocative rhetoric. For a while, it appeared that the White House was considering military options.

In March, Trump accepted Kim’s invitation to meet, breaking with predecessors who had shunned any type of a summit without major concessions from North Korea or multilateral talks that included a host of other Asian countries.

Trump has blamed past presidents for failing to resolve tensions with North Korea as it has pursued a nuclear program, testing missiles in displays of posturing and provocation.

What is unclear whether the summit will lead to any type of substantive outline of an agreement in which North Korea will halt its program and agree to denuclearize, and what kind of verification procedure it would accept.

Trump has downplayed what will come from the meeting, and told reporters last week that it is likely to be just the start. He said on Saturday that he thought that he would know  “within the first minute” of the meeting how serious Kim would be to give up its nuclear program.

“If I think it won’t happen, I am not going to waste my time. I don’t want to waste his time,” Trump said.

Earlier in the day, Trump tweeted a jab at those who doubted the summit.

“The fact that I am having a meeting is a major loss for the U.S., say the haters & losers. We have our hostages, testing, research and all missle launches have stoped, and these pundits, who have called me wrong from the beginning, have nothing else they can say! We will be fine!” he wrote.

The fact that I am having a meeting is a major loss for the U.S., say the haters & losers. We have our hostages, testing, research and all missle launches have stoped, and these pundits, who have called me wrong from the beginning, have nothing else they can say! We will be fine!

The White House said that Trump would leave Singapore earlier that expected — on Tuesday night local time. Kim was scheduled to leave earlier in the day.

“Meetings between staffs and representatives are going well and quickly….but in the end, that doesn’t matter. We will all know soon whether or not a real deal, unlike those of the past, can happen!” Trump tweeted earlier in the day.

The summit also drew the often surreal mix of celebrity and diplomacy. Dennis Rodman, who established an unlikely relationship with Kim starting with a visit in 2013, appeared on CNN from Singapore. Wearing a Make America Great Again cap and a PotCoin.com T-shirt, told Chris Cuomo that Kim is “more like a big kid, even if he is small.”

Rodman later fought back tears after he talked of returning to the United States after a visit to North Korea and then getting “so many death threats” for trying to engage in a kind of soft diplomacy. President Barack Obama, Rodman said, “didn’t even give me the time of day. …He just brushed me off.” By contrast, Rodman said that he has heard from Trump’s administration. Press Secretary Sarah Sanders called Rodman to thank him, Rodman’s agent told CNN.

Rodman said that after traveling to North Korea and meeting with Kim, he predicted the country would “open” to the outside world.

Rodman said that when he first went to North Korea, “I really didn’t understand what the situation was as far as being over there. And when I first met Kim Jong Un, I didn’t know what to expect. I didn’t know who he was, what he represented.”

He said, “I knew something was going on but one I got familiar with the culture and the situation over there, I got really used to being there and I felt like I was at home.”