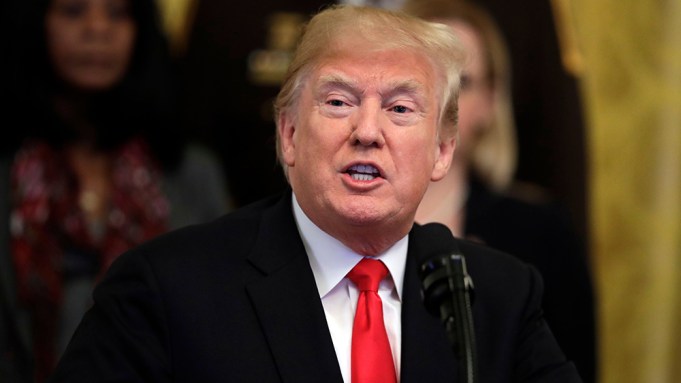 President Donald Trump said packages containing explosive devices sent to top Democrats and CNN were “abhorrent,” and said threats of acts of political violence “have no place in America.”

“In these times, we have to unify, we have to come together. That is a very bipartisan statement,” he said at the beginning of a White House event to address the opioid crisis.

He said, “we will spare no resources or expense in this effort” to investigate who sent the packages.

“This egregious conduct is abhorrent to everything we hold dear and sacred as Americans,” he said.

Trump referred to “suspicious packages mailed to current and former high-ranking government officials” but did not identify the intended recipients by name.

Earlier in the day, CNN evacuated its headquarters in New York after a suspicious package was found in its mailroom. Included in the package was a pipe bomb, as well as an envelope with white powder. That was just hours after the Secret Service reported that they intercepted packages meant for former President Barack Obama, and former President Bill Clinton and former Secretary of State Hillary Clinton. Other packages were discovered with former Attorney General Eric Holder, billionaire George Soros — a top Democratic donor — and Rep. Maxine Waters (D-Calif.)

Authorities were investigating whether the packages were connected. The packages intended for Brennan at CNN, the Clintons, Obama, Holder, and Soros listed Rep. Debbie Wasserman Schultz (D-Fla.) as its return address, the FBI said. All of the public figures have been targets of the Republican right.

“The packages are similar in appearance, as depicted in the below photograph, and contain potentially destructive devices,” the FBI said, as it released a photo of one of the packages.

Statement on the FBI’s Investigation of Suspicious Packages https://t.co/wwXDpyNt3A pic.twitter.com/rXu1wBAQHj

Trump said he was briefed on the incidents by the the FBI, the Justice Department, the Department of Homeland Security, and the Secret Service, and said the “full weight” of the government was being deployed in the investigation.

“We will spare no resources or expense,” Trump said.
Trump is still scheduled to attend a rally on Wednesday in Wisconsin, but it was unclear if he will tone down rhetoric that has targeted Clinton, Obama, Waters, and others, as well as CNN.
Trump has repeatedly attacked CNN as fake news, and has referred to the “fake news media” as the “enemy of the American people.”

After his remarks, CNN President Jeff Zucker issued a statement in which he said, “There is a total and complete lack of understanding at the White House about the seriousness of their continued attacks on the media. The president, and especially the White House press secretary, should understand that words matter. Thus far, they have shown no comprehension of that.”

Zucker also told employees that it was safe to return to their offices. “The NYPD has concluded its security sweep, and it is now safe to return to the building,” he said in a memo to staff. “I so appreciate your patience, as I know what a long day this has been for all of you.”

It was unclear what the motive was of the sender or senders, as authorities did not say whether they had received any kind of note or other message.
At a press conference in front of the Time Warner Center in New York, Mayor Bill de Blasio had a message to “all public officials of all partisan affiliations.”
“Don’t encourage violence. Don’t encourage hatred. Don’t encourage attacks on media,” he said.
Rep. Steve Scalise (R-La.), who was shot when an assailant opened fire on a congressional baseball team practice in 2017, wrote on Twitter that he has “experienced first-hand the effects of political violence, and am committed to using my voice to speak out against it wherever I can.”
“Those responsible for these evil acts of terror must be hunted down and brought to justice, and I have great confidence that our law enforcement officers will succeed in that mission. As a nation, we must agree that this is a dangerous path and it cannot become the new normal,” he added.
Trump’s 2020 presidential campaign sent out an email to supporters on Wednesday singling out CNN and saying that it was “time for us to give the media another wake-up call from the American people.” It linked to a “media accountability survey.”
“The email went out today unfortunately was a pre-programmed, automated message that was not caught before the news broke,” campaign manager Brad Parscale said. “We apologize for this. We in no way condone violence against anyone who works for CNN, or anyone else.”
House Minority Leader Nancy Pelosi and Senate Minority Leader Chuck Schumer said that Trump’s words “ring hollow until he reverses his statements that condone acts of violence.

“Time and time again, the President has condoned physical violence and divided Americans with his words and his actions: expressing support for the Congressman who body-slammed a reporter, the neo-Nazis who killed a young woman in Charlottesville, his supporters at rallies who get violent with protestors, dictators around the world who murder their own citizens, and referring to the free press as the enemy of the people,” the said.

At a rally last week, Trump expressed support for the actions of Rep. Greg Gianforte (R-Montana), who body slammed a news reporter on the eve of a special election in that state last year. Trump said that “any guy that can do a body slam, he’s my kind of guy.”