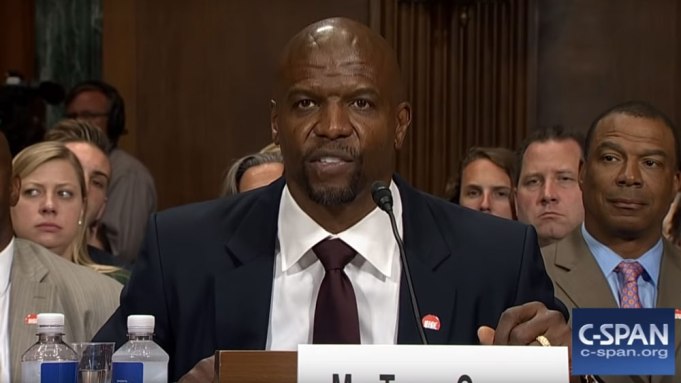 WASHINGTON — Terry Crews testified before the Senate Judiciary Committee on Tuesday that “toxic masculinity permeates culture,” recounting his own story of sexual assault by a Hollywood agent.

He also said that he wouldn’t do an “Expendables 4” after what he described as the producer’s attempt to retaliate.

In his opening statement to the committee, Crews did not name the agent, but he has filed a lawsuit against WME partner Adam Venit, claiming he groped him at a 2016 party. He has also recounted the incident in interviews and on “Dr. Phil.”

Crews told the committee, “The assault lasted only minutes, but what he was effectively telling me while he held my genitals in his hand was that he held the power. That he was in control.”

He added, “This is how toxic masculinity permeates culture. As I shared my story, I was told over and over that this was not abuse. This was just a joke. This was just horseplay. But I can say one man’s horseplay is another man’s humiliation. And I chose to tell my story and share my experience to stand in solidarity with millions of other survivors around the world. That I know how hard it is to come forward, I know the shame associated with the assault. It happened to me.”

The hearing was held on the Sexual Assault Survivors’ Bill of Rights, which he said “gives survivors the right to have time to distance themselves from the immediate trauma before making the difficult decision to report the assault to law enforcement.” Also testifying was Amanda Nguyen, the CEO and founder of civil rights organization Rise.

The Los Angeles County District Attorney’s office declined to prosecute Crews’ case as a felony, and the Los Angeles City Attorney said a misdemeanor complaint fell outside the statute of limitations.

When Sen. Chuck Grassley (R-Iowa), the chairman of the Judiciary Committee, asked Crews whether he had faced any retaliation for coming forward, Crews said the producer of “Expendables” “called my manager and asked him to drop my case in order for me to be in the fourth installment of the movie, and if I didn’t there would be trouble.”

Crews has previously identified the producer as Avi Lerner.

He said he would not appear in “Expendables 4,” noting that Lerner is also being accused in a separate claim. In 2017, Lerner and Millennium Films were sued by a former executive for sexual harassment.

Crews also told the committee that growing up, he “watched as my father violently abused my mother, using his power and authority to dominate her. All I could think was how I wanted to protect her. How, if I get strong, I can protect her from this living nightmare.”

He said as he grew up, “this thought transformed the type of man I became. I swore I would never be like my father and yet I believed, to my core, that as a man, I was more valuable in this world. As a protector and symbol of strength, I was more worthy. That women were beneath me.”

He said he “used images of women’s body and pornography at my disposal, validating my need for control. I often cut women short of sharing personal details of their lives so they would seem less human, less real. As a man, I was taught my entire life that I must control the world. So, I used power, influence, and control to dominate every situation: from the football field to the film set, even in my own home with my wife and children.”

That changed with the 2016 incident, he said.

“I’m not a small or insecure man, but in that moment, and in this time following, I’ve never felt more emasculated,” he said. “As I watched women and colleagues in my industry come forward to share their #MeToo stories, this shame washed over me again and I knew I needed to act.”

Crews told the committee that “anywhere where there is a power dynamic is where this problem is really rampant,” noting that he has seen it in sports, politics, and other areas.

“Hollywood definitely has been a problem area, simply because there are so many people who view this as a dream,” he said. “What happens is someone has power over these dreams. What also happens is you get tricked into thinking that this type of behavior is expected, that it is part of the job. That this harassment, abuse, even rape is part of your job description.”

Last year, Venit was suspended without pay and demoted, according to WME.

“An investigation was launched immediately after management was made aware of the situation in October of this year,” the agency said in a statement. “The investigation has resulted in Adam Venit being suspended without pay and demoted from his position as head of the motion picture department.”

Lerner did not immediately respond to a request for comment.