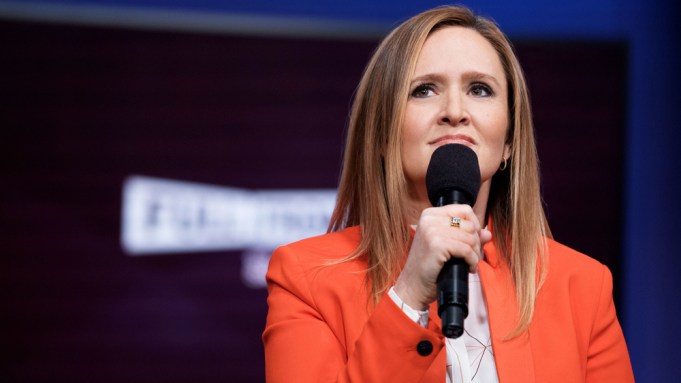 Samantha Bee’s Wednesday opener for “Full Frontal” did not shy away from decrying Donald Trump’s new executive order to remedy his “policy-not-a-policy” on separating families at the border.

She kicked her monologue off by commiserating with her audience, offering that “if like most people you’ve been feeling a little uncomfortable this week with our new Pre-K prisons, good news. The President has fixed it with the next worst thing.”

Exasperated with how the crisis at the border indeed feels like it has gone on for 60 years, rather than Trump’s statement that “nobody’s taken care of criminally charging adults that cross the border” for that long, Bee condemned his executive order to end his policy of family separations by keeping families together in various shelters. “No more baby internment camps, just regular internment camps. That’s what we call a 2018 win,” she said.

Bee pointed to the notion that Trump is challenging the 1997 Flores Consent Decree, which deems that “children must be released from detention facilities within 20 days” and in the least restrictive conditions as possible. She joked how that includes “no skinny jeans, no toddler shapewear, and no jails.” But she also noted how at a certain point these children will cease to be children. “It’s called the ‘behind Bars Mitzvah.'”

Bee also warned viewers not to “hold their breath” for senators tweeting their opposition to family separation over the weekend to come up with anything better. “The leading bills in the Senate and the House also consider indefinite family detention to be a solution. And some Democrats have gone on record saying they’re willing to vote for it.” She chided: “Agreeing to vote with Ted Cruz is like agreeing to do anything with Ted Cruz. You’ve lost your way.”

The comedienne went on to surmise that the President’s executive order will come as the biggest surprise to Homeland Security Secretary Kirstjen Nielsen, as she is “the one person who claimed they weren’t doing that in the first place.”

Bee then relayed a roundup of her press conference in a “villain montage,” likening Nielsen to the likes of antagonists like Miss Minchin from “A Little Princess,” Agatha Trunchbull from “Matilda” who hates “those putrescent little children,” and Dolores Umbridge from “Harry Potter” for her focus on the “education” of children while neglecting their well-being.

For instance, Nielsen warned: “The border is being overrun by those who have no right to cross it.” Bee then cut to Ursula the sea witch from Disney’s “The Little Mermaid” telling Ariel that “if you want to cross the bridge, my sweet, you’ve got to pay the toll.”

Bee also bemoaned the lack of clarity among the Trump administration’s inability to “get its story straight,” so they in turn “told every story.” She proceeded to show a soundbite of a reporter asking: “Can you describe the separation process chief? How does it happen?” The border patrol chief responded with: “There is no separation process. As they go through the judicial process, they are temporarily separated.”

Referencing the children at the border living in cages, Bee also mocked the border patrol’s discomfort in referring to the children’s dwellings in such a manner.

“Sorry, not ‘cages.’ I meant ‘chain-link compassion walls,'” she said.

In rebuking “Trump’s lady brigade act” including Sarah Huckabee Sanders, Kellyanne Conway, and Nielsen, Bee was quick to recognize that while they are “complicit, the family separation policy comes from these guys” — turning to images of Trump, Jeff Sessions, John Kelly, and Stephen Miller.

“Yell at Kirstjen Nielsen all you want, and I have, and I will continue to do so, but you should be yelling at them, too.”