Trump Embraced ‘Roseanne,’ but No Word Yet on What He Thinks Now 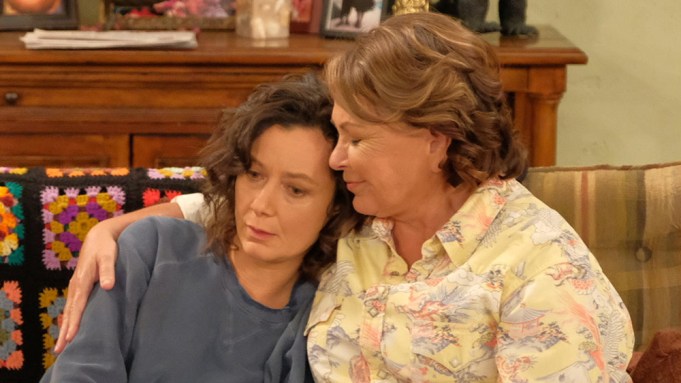 WASHINGTON — The White House has not yet commented on ABC’s cancellation of “Roseanne” following star Roseanne Barr’s racist tweet.

White House spokeswoman Sarah Huckabee Sanders declined to say what the president thought about the series’ cancellation. “That’s not what he’s spending his time on,” she said.  “And I think that we have a lot bigger things going on in the country right now, certainly that the President is spending his time when it comes to policy.”

But when the series launched and became an unexpected success in March, President Donald Trump called her, congratulating her on the show’s success.

At a rally in Ohio, he even embraced her success as attributable to his campaign. He told the crowd that Mark Burnett, the executive producer of “The Apprentice,” called him to tell him that the “Roseanne” reboot was a hit.

Burnett, Trump said, told him, “Did you see ‘Roseanne’s’ ratings?’ They were over 18 million people, and it was about us.”

Barr tweeted early Tuesday about Valerie Jarrett, former senior adviser to President Barack Obama, and wrote that “Muslim Brotherhood & Planet of the Apes had a baby = vj.” She later deleted the post and apologized. ABC decided to cancel the show, its breakout hit of the 2017-18 season, just hours later.

Jarrett is already booked to appear on an MSNBC special on everyday racism on Tuesday night.

“We have to turn it into a teaching moment,” she said in a clip released by the network. “I’m fine. I’m worried about all the people out there who don’t have a circle of friends and who come right to their defense.”

“There was only one thing to do here, and that was the right thing,” said Bob Iger, the chairman and CEO of The Walt Disney Co.

There was some consternation among conservatives that Barr’s tweets will provide fuel to arguments that Trump and his followers share her views.

Erick Erickson argued on Twitter that Barr “was never a center-right figure. And she’s been a pretty openly insane person for a while. ABC tried to use her to connect with and program to Trump voters. I suspect this cancellation will hurt that cause.”

He added, “I wasn’t a fan of the relaunch or how it was marketed. The wild embrace of Roseanne by people on the right just makes it easier now to bash them via Roseanne. And I think it just will cause networks to ignore real social conservatives now even more than they did.”

Ben Shapiro wrote, “Interesting to see the crossover between people who thought the NFL banning kneeling for the anthem was a First Amendment debacle, but think ABC didn’t raise any First Amendment issues by firing Roseanne. For me, they’re both private corporations that get to decide how certain speech impacts their product. So while I think the NFL handled things poorly, I’m not supremely troubled by their decision, and I think ABC was right to dump Roseanne.”

Eric Bolling tweeted back at Barr that “no apology necessary at all,” and added, “please don’t leave.” He later deleted the tweet.

From many on the right, the show’s success was seen as an example of what happens when Hollywood stops ignoring middle America — or the type of traditional Democratic working class voters that Trump peeled off in 2016 to win the presidency. Although ABC had signaled that the show would tone down its politics in the second season, much of the publicity beforehand was all about Barr’s real-life support of Trump in an industry that leans left.

But she has a history of political provocation, stretching all the way back to 1990, when she gave an off-key rendition of the National Anthem at a San Diego Padres game followed by a gesture in which she grabbed her crotch. President George Bush called it “disgraceful.” She later apologized, but told The Washington Post in 2015 that it took her years to deal with the fallout. Did she regret it? Nope.