Parkland Survivors Recount Terrifying Moments of Shooting: ‘It Was Like a Lifetime of Horror’ 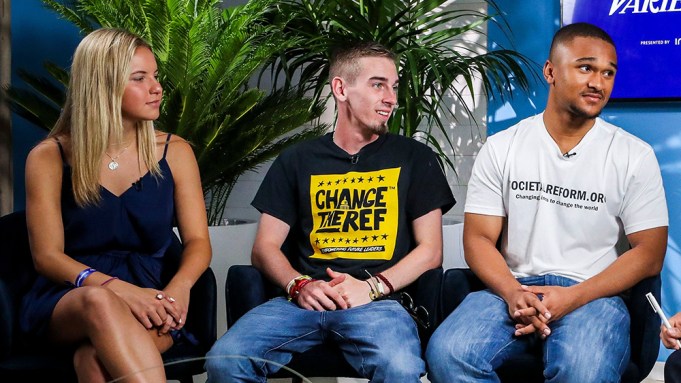 Leal recalled that Feb. 14 was “like any school day,” but “at 2:20 p.m. our lives forever changed.” That was when the second fire alarm of the day sounded, and “we knew that something was off.” Leal and her friends ran outside the classroom, fearing that a fire had started in the freshman building. As soon as they arrived in the parking lot, they heard other students and administration scream: “Code Red: Active Shooter. Take cover. Run for your life.”

Leal described how she went inside a classroom and hid underneath a couch for two and a half hours. “I feel like as soon as I got off-campus, that’s when it really hit me,” she said.

Zeif and his younger brother were both in the freshman building where the shootings occurred. “After about ten minutes of being curled up in a ball, I realized that my little brother, a freshman, was right above me. So, I texted him and I said: ‘Are you okay?’ He said: ‘Yeah, I’m fine, but my teacher just got shot and he’s dead.'”

Zeif texted his family, girlfriend, and best friend that he loved them and soon received a message from victim Joaquin Oliver’s father. Oliver’s father asked: “Where’s Guac? He’s not answering his phone.” Zeif tracked Oliver’s phone and figured he was fine since his location showed he was on the other side of the school. “I said: ‘He’s okay. He probably just doesn’t have good service,'” Zeif recalled telling Oliver’s father. But Zeif tracked Oliver’s location again once he got home and realized that Oliver was indeed also in the freshman building, as he was watching the news revealing that Joaquin Oliver had died in the shooting.

Zeif’s father, who was on a business trip to Brazil during the shooting, flew back home as soon as he heard. When Zeif went to see him in the morning, his father asked if they were going to visit Oliver in the hospital. Choking up, Zeif remembered saying: “No, he’s gone. Just like that.”

Koerber described how the students had been told there would be a drill from the start of the year, but before they knew it, they were “submerged into the real situation.” As he was hiding in the back of a closet in one of the band rooms, “there were people who were just crying all around me.” He said, “My first thought was, ‘If I never see my mom again or any of my family members, I really want them to know that I love them.”

The three Parkland survivors reflected on how the experiences “literally felt like the rest of your life,” Zeif said. Leal echoed: “It was like a lifetime of horror.”

“Shame on you,” Leal said. She, Zeif, and Koerber expressed that “if we vote them out,” the country has a chance at reaching a place where guns and assault rifles are illegal, banned, and taken out of the hands of people who should not have them.

“I don’t think they understand that we’re the employers and they’re the employees,” Zeif said. “It’s either you’re with us or against us. And if you’re against us, you’re out. So, they won’t be in office much longer.”

Leal insisted that the 17 victims who lost their lives “will not die in vein. We’re here today, and we’re grateful to be here today,” she said. “Everything we do from now on is for them.”