WASHINGTON — Former President Barack Obama and First Lady Michelle Obama made a rare public appearance in Washington on Monday at the unveiling of their portraits at the Smithsonian’s National Portrait Gallery.

Dozens of friends and supporters, including former Vice President Joseph Biden, Attorney General Eric Holder, and Senior Adviser David Axelrod, gathered in the atrium of the gallery for the ceremony. Among those attending were Steven Spielberg and Kate Capshaw, Tom Hanks and Rita Wilson, and Gayle King.

Artist Kehinde Wiley, known for large, colorful paintings of African-American subjects, painted the former president’s portrait, which will be displayed in the museum’s America’s Presidents exhibition. The seven-foot portrait features a background of flowers, including chrysanthemums, the official flower of the Obamas’ hometown of Chicago; jasmine, for Hawaii, where Obama spent his childhood; and African blue lilies to reference his late Kenyan father. 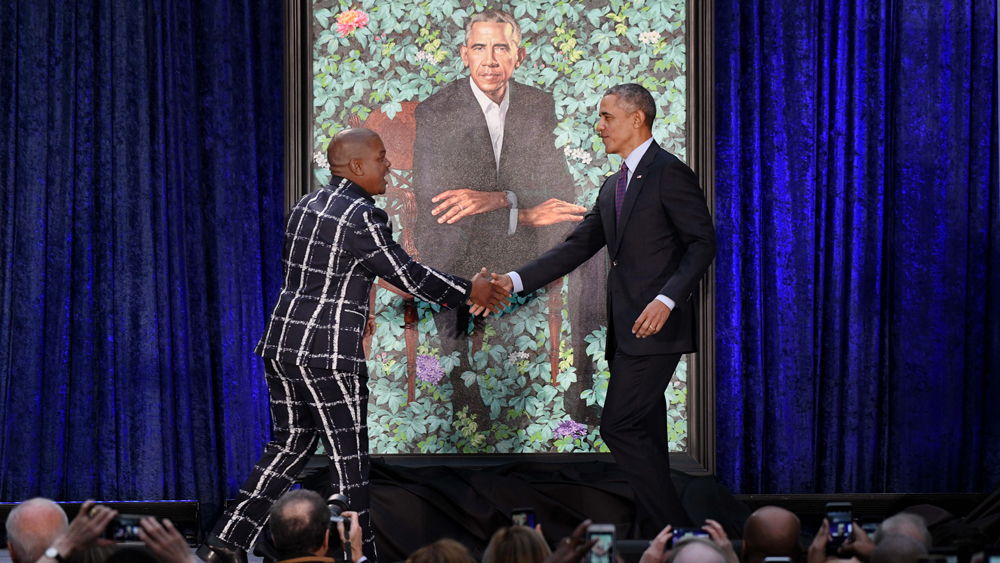 Amy Sherald, who painted Michelle Obama’s portrait, who was the first woman to win the National Portrait Gallery’s Outwin Boochever Portrait Competition, is known for conveying “the inner strength of her subjects through a combination of calm expressions and confrontational poses,” the Smithsonian noted. Her portrait of the former first lady features gray skin tones that are a distinctive aspect of a majority of her paintings. Michelle Obama is wearing a dress by designer Michelle Smith’s label Milly, and the geometric color pattern reminded her of abstract artist Piet Mondrian, she said. The dress also was inspired by quilts made by women in a small remote black community in Alabama.

“My approach to portraiture is conceptual,” Sherald said at the unveiling. “Once my paintings are complete, the model no longer lives in that painting as themselves. I see something bigger, more symbolic, an archetype.”

“The act of Michelle Obama being her authentic self became a profound statement that engaged all of us, because what you represent to this country is an ideal, a human being with integrity, intellect, confidence and compassion,” she said.

Michelle Obama said that she was “humbled. I am honored. I’m proud, but most of all so incredibly grateful to all the people who came before me in this journey.” As the portrait was unveiled, she shook her head in amazement.

She talked of having a “sister girl” connection with Sherald.

The Obamas selected the artists from a group of names submitted by the National Portrait Galley. The former first lady said that she was “blown away by the boldness of her color and the neatness of her subject matter.”

Spielberg and Capshaw were among the major donors who funded the commission, and other contributions came from John Legend and Chrissy Teigen. The total cost of the commissions and event was about $500,000, according to a spokeswoman for the Portrait Gallery.

After the former president’s portrait was unveiled, Obama took to the lecturn and said to the crowd, “How about that? Pretty sharp.” Wiley’s painting drew a wow-like gasp as it was unveiled.

Obama quipped that as he sat for the portrait, he tried to “negotiate” that he have less gray hair and smaller ears, but Wiley had too much integrity to make the change.

He also joked about Wiley’s past portraits of ordinary people in situations that evoke famous figures, and that he didn’t want to be on a horse or holding a scepter. “I got enough political problems without you making me look like Napoleon. We got to bring this down just a notch.”

He said that he was not a great subject because “I don’t like posing. I get impatient. I look at my watch and think, ‘This must be done. One of those pictures must have worked. Why is this taking so long.’ So it is pretty tortious trying to take a picture of me, much less paint a portrait.”

Obama said that Wiley, “in the tradition of a lot of great artists, actually cared to hear how I thought about it, before doing exactly what he intended to do.”

More seriously, Obama said that what he “was always struck by in his portraits was the degree to which they challenged our traditional views of power and privilege, and the way that he would take extraordinary care and precision and vision in recognizing the beauty and grace and dignity of people who were so often invisible in our lives, and put them on a grand stage.”

Wiley gave an emotional speech in which he talked of growing up in South Central Los Angeles and visiting museums where “there weren’t too many people like me” strolling through galleries.

“It doesn’t get any better than that,” he said. “I was humbled by this invitation, but I also was inspired by Barack Obama’s personal story, that sense in which both he and I have that echo of single parents, African fathers, that search for the father.”

The painting’s use of flowers and plants as a backdrop represent Obama’s life path, he said. “In a very symbolic way what I am doing is charting his path through those plants that sort of weave their way. There’s a fight going on between he in the foreground and the plants that are trying to announce themselves. Who gets to be the star of the show? The story or the man who inhabits that story?”

Both of the Obamas said that they had never sat for a portrait before. The iconic Obama ‘HOPE’ portrait by Shepard Fairey had been displayed at the gallery, but Obama noted that he did not sit for that painting. Additional portraits have yet to be unveiled of the Obamas that will hang in the White House.

Biden told Variety afterward that he thought that the paintings were “great,” and then praised not just Wiley’s artistic talent, but his oration. He quipped that he’d like to hire that artist as a speechwriter.

While Obama’s portrait will be featured in the gallery with other presidents, the portrait of the former first lady will be featured in the museum’s “recent acquisitions” corridor. The portrait gallery began collecting portraits of past presidents when it opened in 1968, and began commissioning works in 1994, with former President George H.W. Bush. It started commissioning portraits of former first ladies in 2006, with a portrait of Hillary Clinton.