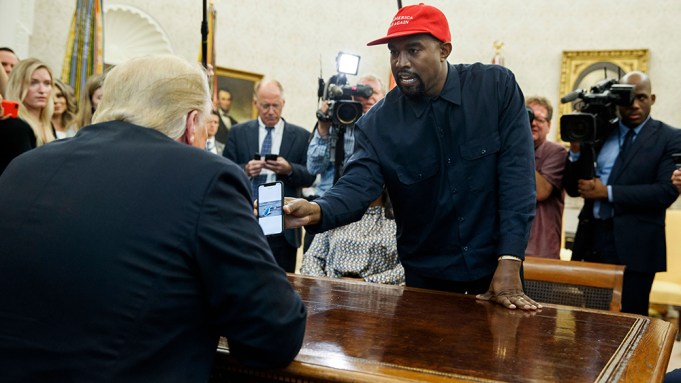 WASHINGTON — Kanye West met with President Donald Trump at the White House on Thursday for a lunch to discuss topics like prison reform and urban revitalization.

But that is not likely to be the media takeaway from the scene.

After pool reporters were allowed into the Oval Office for a photo op, West and Trump answered questions and the artist went on a 10-minute soliloquy, making stream-of-consciousness points about the state of the world and his support for the president.

As Trump sat at the Resolute Desk, West talked. A lot.

“Let’s stop worrying about the future. All we really have is today. .Over and over again the eternal returns, the hero’s journey. And Trump is on his hero’s journey right now. He might not have thought he’d have a crazy motherf—er like Kanye West” to support him, West said.

The focus was the 2016 presidential election and Hillary Clinton, as West wore a red “Make America Great Again” hat.

“I love Hillary. I love everyone, but the campaign ‘I’m With Her,’ just didn’t make me feel — as a guy, who didn’t get to see his dad all the time — like a guy that could play catch with his son. There was something, when I put this hat on, it made me feel like Superman,” West said.

Looking at Trump, he said, “You made a Superman cape for me. That’s my favorite superhero.”

At one point, a reporter asked Trump whether West could be a future presidential candidate.

“Could very well be,” Trump said.

At another moment, West told ABC News’ Jon Karl, “I don’t answer questions that are simple soundbites. You are tasting a fine wine, that has multiple notes to it. You better play 4-D chess with me like it’s ‘Minority Report,’ cause it ain’t that simple. It’s complex.”

West said he was diagnosed with bipolar disorder, but a neuropsychologist said he “actually wasn’t bipolar. I had sleep deprivation.”

The scene was surreal, even for Trump’s White House, where those who embraced his campaign have gotten time in the Oval Office. Sarah Palin visited the Oval Office last year — along with Kid Rock and Ted Nugent.

After West spoke, showering Trump with high praise, Trump himself said, “I tell you what, that was pretty impressive. That was quite something.”

“It was from the soul,” West said. “I just channeled it.”

Also sitting at the desk was football great Jim Brown. Trump said Brown “came out of nowhere” to help with criminal justice issues.

Most of the time, though, the talk came down to the administration’s accomplishments.

West also mentioned North Korea and said, to Trump, “You stopped the war.”

West veered into different topics as he spoke — not all that different from Trump unleashed at a campaign rally or extended interview. He showed Trump an iPhone photo of a hydrogen-powered plane he thought that Trump should fly in instead of Air Force One. “This is what our president should be flying in,” he said.

West has gotten a lot of blowback from other artists on the left who question how he could support Trump.

“A liberal would try to control a black person through the concept of racism because they know that we are very proud, emotional people,” he said. “So when I say, ‘I like Trump’ to someone that’s liberal, they’ll say, ‘Oh but he’s racist.’ You think racism can control me. Oh, that won’t stop me. That’s an invisible wall.”

He again made a comment about abolishing the 13th Amendment, which abolished slavery, calling it a “trap door,” in what seemed like an effort to show that it led to

“I did say abolish with the hat on, because why would you keep something that’s a trap door?” he said, as he linked the 13th Amendment to incarceration rates.

“If you are building a The Constitution is the base of our industry, of our country, of our company. Would you build a trap door that if you mess up and then accidentally something happens, you fall and you end up next to the Unabomber? You gotta remove all that trap door out of the relationship.”

He explained why others should join him in backing the president.

“What I need ‘Saturday Night Live’ to improve on, or liberals to improve on, is if he don’t look good, we don’t look good,” West said. “This is our president. He has to be the freshest, the flyest, the flyest planes, the best factories and we have to make our core be in power. We have to bring jobs into America because our best export is entertainment and ideas, but when we make everything in China, and not in America, then we are cheating our country.

“We are putting people in a position to have to do illegal things to end up in the cheapest factory ever, the prison system.”

West raised the case of a 68-year-old prisoner, Larry Hoover, in arguing for sentencing reform.

Near the end of the meeting, Trump said the idea was to have lunch “with two people that I like, and I guess they like me.”

“I guess you know I love you,” West said.

Trump replied, “I know you do. I don’t want to out you in that spot.”

West got up out of his chair and came around the desk to give Trump a side hug. “I love this guy right here,” West said.

Joining West, Trump, and Brown at the lunch were Ivanka Trump and Jared Kushner, White House advisers and Trump’s daughter and son-in-law, respectively.

Trump met in May with West’s wife, Kim Kardashian, on her visit to the White House to talk about prison reform and the case of a woman serving a lifetime sentence for a non-violent drug offense. Several days later, Trump granted clemency to the woman, Alice Marie Johnson.