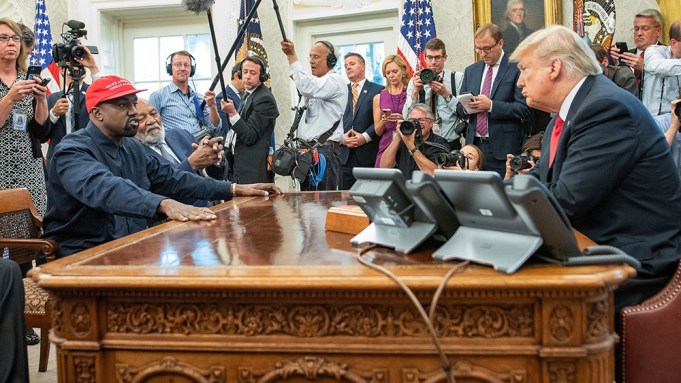 Kanye West met with President Donald Trump at the Oval Office in the White House on Thursday, where the rapper touched on a variety of topics including mental health and prison reform.

West also said he viewed Trump as a “father figure,” adding that putting on the “Make America Great Again” hat made him feel like “Superman” who could help the world.

At one point, Kanye said, “Let’s stop worrying about the future all we have is today. … Trump is on his hero’s journey right now. He might not have thought he’d have a crazy motherf—er like Kanye West” to support him.

The bizarre encounter sparked a flurry of reactions on social media, with many criticizing both West’s tirade and the meeting itself for taking attention away from more pressing matters.

Chelsea Handler was one of many celebrities who slammed in the interaction. “Kanye West says he thinks of Trump as a father. Guess who doesn’t think of Kanye as a son?” she tweeted.

Kanye West says he thinks of Trump as a father. Guess who doesn’t think of Kanye as a son?

Ike Barinholtz, who directed the upcoming Trump-inspired political satire “The Oath,” said the meeting was inappropriate given the hurricane that is wrecking havoc on the east coast.

Billy Eichner took a jab at former CBS Corp. chief Leslie Moonves and other news organizations for benefitting from the ratings boost.

"It may not be good for America, but it's damn good for CBS…Man, who would have expected the ride we're all having right now? … The money's rolling in and this is fun” – Les Moonves on Trump, 2016 pic.twitter.com/MSfe6xjOur

So campaigning and spending time with a superstar rapper is inappropriate while Americans are reeling from a major storm, or….?https://t.co/13s3H4hdrx

If this is where Kanye wants to be, then let him be there. Quit trying to explain Kanye to us. He’s doing a pretty good job of telling us who he is and where he wants to be. Hmmmm is this where the Kardashian’s stand also. Their time time might be up also. Just saying !!! pic.twitter.com/qWXbEn1jIh

Just when you think we can't sink any lower, Kanye West is in the Oval Office talking to reporters. By the way, Mr. Trump, there was a really bad hurricane.

As I keep saying, shamelessness is a superpower and Ye has even greater reserves of it than Trump.

I’m not sure what “love” means as he’s using it here. And his support of Trump because Hillary didn’t make him feel strong is gross. pic.twitter.com/DOXZyq2gSa

Watching @CNN, seeing Kanye at the White House this afternoon was some of the saddest stuff I’ve seen in quite sometime. Not gonna go OFF, though. I’m just sad. I’ll leave it to y’all to state the obvious as to why.