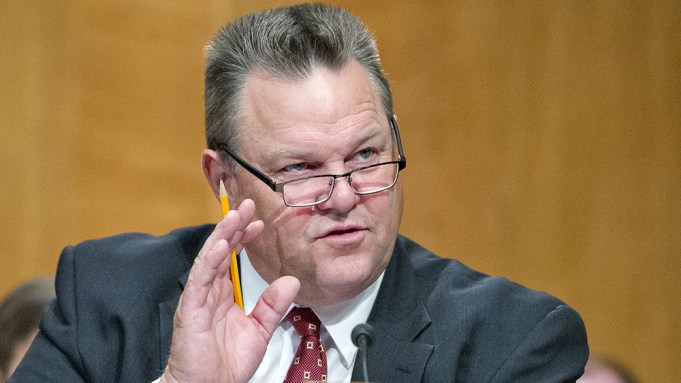 WASHINGTON — A new radio ad from the National Republican Senate Committee targets Sen. Jon Tester (D-Montana) for remaining “silent for days” over a Pearl Jam poster that featured an image of a dead corpse of President Donald Trump in front of the White House.

The poster was promoting an Aug. 13 get-out-the-vote concert in Missoula. Tester’s campaign offered ticket packages to the concert and a reception the day before with the senator and Jeff Ament, Pearl Jam bassist.

The ad, which was released on Thursday, states that “a vote for Tester is a vote to put liberal Democrats in control, where they’ll work to impeach President Trump. But for the radical far-left, impeachment isn’t enough. Celebrities have talked about killing the president or blowing up the White House. Now, a rock band comes to Montana, throws a concert to support Tester – and promotes it using a vulgar, despicable poster featuring President Trump’s dead corpse on the White House lawn.”

It also calls on Tester to return the money raised from the concert. “And if he won’t he do the right thing and give it back, doesn’t that tell us all we need to know about the real Jon Tester?”

Calvin Moore, spokesman for the NRSC, said that Tester “showed his true colors by refusing to personally condemn even the most unhinged, far-left fringes of his party who’ve gone so low as to call for outright violence against the President of the United States.” He said that the spot was running on stations statewide over the next week.

The Tester campaign last week said that it was unaware of the poster and “don’t like it,” a spokesman, Chris Meager, told several news outlets. “And we don’t condone violence of any kind. Period.” The campaign did not immediately respond to a request for comment over the NRSC ad.

Ament issued a statement in which he said, “The role of artists is to make people think and feel, and the current administration has us thinking and feeling. I was the sole conceptualist of this poster, and I welcome all interpretations and discourse. Love, from the First Amendment, Jeff Ament.”

Republicans have tried to link Democratic rivals to what they characterize as “unhinged” comments about Trump. The Republican National Committee released a web video in June that featured some of the outrageous statements made by celebrities like Kathy Griffin and Madonna.

Earlier this week, the NRSC attacked Democrat Phil Bredesen’s campaign for appearing with Ben Folds and Jason Isbell, the latter of whom has been particularly critical of Trump. Bredeson is running for Senate against Republican Marsha Blackburn, and his campaign defended the booking of the entertainers at the Nashville rally. At the event, Isbell said, “For the first time in my life I’m hinged.”