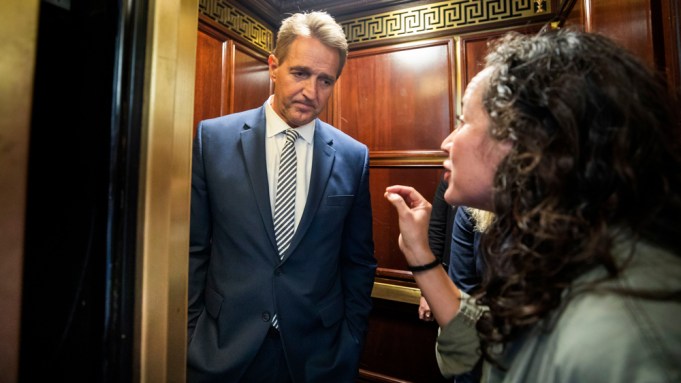 Two women who say they have experienced sexual assault confronted Sen. Jeff Flake in an elevator at the U.S. Capitol minutes after he announced that he will vote to confirm Judge Brett Kavanaugh to the Supreme Court.

One of the women, who used her foot to prevent the elevator door from closing in the Russell Senate Office Building, told Flake on Friday, “Look at me when I’m talking to you. You’re telling me that my assault doesn’t matter. That what happened to me doesn’t matter. That you’re going to let people who do those things into power.”

“Don’t look away from me. Look at me and tell me that it doesn’t matter what happened to me. That you will let people like that go into the highest court of the land and tell everyone what they can do to their bodies,” she continued when Flake avoided eye contact.

According to USA Today, the woman is Center for Popular Democracy co-executive director Ana Maria Archila.

“I need to go to the hearing,” he then told reporters. “I just issued a statement. I’ll be saying more as well.”

Kavanaugh has been accused by Christine Blasey Ford of sexually assaulting her in high school in the early 1980s.

“When Dr. Ford’s allegations against Judge Kavanaugh surfaced two weeks ago, I insisted that she be allowed to testify before the committee moved to a vote,” Flake said in a statement earlier in the day. “Yesterday, we heard compelling testimony from Dr. Ford, as well as a persuasive response from Judge Kavanaugh. I wish that I could express the confidence that some of my colleagues have conveyed about what either did or did not happen in the early 1980s, but I left the hearing yesterday with as much doubt as certainty.”

“What I do know is that our system of justice affords a presumption of innocence to the accused, absent corroborating evidence,” he added. “That is what binds us to the rule of law. While some may argue that a different standard should apply regarding the Senate’s advice and consent responsibilities, I believe that the constitution’s provisions of fairness and due process apply here as well.”