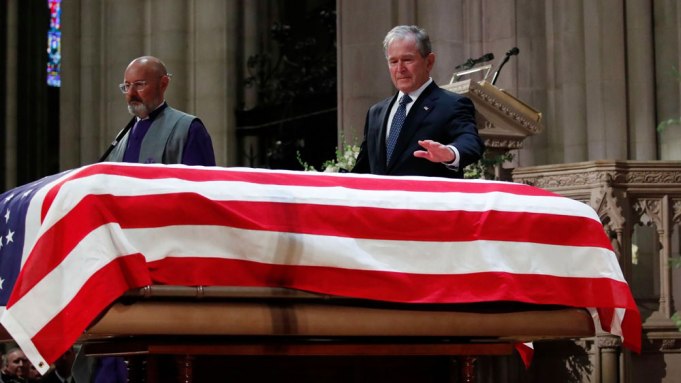 WASHINGTON — George H.W. Bush was eulogized as a president who put country over party, humility over boastfulness, and who bridged divisions in the name of pragmatism and friendship, at a state funeral that at times implicitly presented a contrast to the current political moment.

There was no reference to today’s toxicity in politics, as there was at the funeral of John McCain on Sept. 1, but media attention focused on the presence of President Donald Trump among the former presidents. He has had a chilly relationship with the Bush family and has belittled some of his predecessors.

Trump took his seat and, after First Lady Melania Trump shook hands with the Obamas, he did so as well. It was the first time Trump and Obama have met since the inauguration.

The president, however, did not make contact with the Clintons, who sat next to the Obamas. After Melania Trump shook Bill Clinton’s hand and Hillary Clinton gave the first lady a nod, Hillary stared straight forward and did not even look toward the president as he took his seat. After the service was over, Trump left without acknowledging the Clintons.

Brief handshake between President Trump and the Obamas. The Clintons looked on and ignore his arrival. pic.twitter.com/3BOWumwd1n

The president did not speak at the service, but he and Melania Trump kept with tradition and extended courtesies to the Bush family. Trump declared Wednesday a national day of mourning, and visited with George W. Bush and Laura Bush on Tuesday.

For their part, the Bush family intended that the gathering of Trump and all of his living predecessors, along with Mike Pence and former vice presidents, project at least a momentary show of unity. A common theme throughout the eulogies was 41st president’s record of prioritizing public service.

Bush said his father “recognized that serving others enriched the giver’s soul. To us, his was the brightest of the thousand points of light.”

He mentioned how his father still became good friends with Bill Clinton, who defeated him in the 1992 election, and also had the grace to write personal letters and notes to many other people.

“Dad could relate to people from all walks of life. He was an empathetic man. He valued character over pedigree. … He looked for the good in each person, and he usually found it,” he said, choking up as he called his father the best that a son or daughter could have.

“He showed me what it means to be a president who serves with integrity,” Bush said.

He recalled speaking to his father in his final moments, and “the last words he would ever say on Earth were, ‘I love you, too.’ To us he was close to perfect, but not totally perfect. His short game was lousy. He wasn’t exactly Fred Astaire on the dance floor. The man couldn’t stomach vegetables, especially broccoli.” The crowd in the cathedral laughed.

Jon Meacham, Bush’s biographer, said his “life code, as he said, was tell the truth. Don’t blame people. Be strong. Do your best. Try hard. Forgive. Stay the course. And that was — and is — the most American of creeds.”

He said Bush’s phrase “thousand points of light,” which became a call to volunteerism and national service, and Abraham Lincoln’s call to “better angels of our nature,” are “companion verses in our national hymn.”

He said that despite Bush, despite his virtues, was not the greatest of public speakers.

“As Dana Carvey said, ‘The key to a Bush 41 impersonation is a Mister Rogers trying to be John Wayne,'” Meacham said, referring to Carvey’s “Saturday Night Live” impressions during the Bush presidency.

He also referred to Bush’s penchant for politics, but did not make mention of some of the more divisive aspects of his campaigns. “An imperfect man, he left us a more perfect union.”

Meacham recalled Bush’s service in World War II when, as a younger naval fighter pilot, his plane was shot down and he was rescued from a life raft at sea.

“The rest of his life was a perennial effort to prove himself worthy of his salvation,” Meacham said. “A lion who not only led us, but who loved us. That’s why he was spared.”

Meacham read his eulogy to Bush before he died, according to NBC News’ Willie Geist.

With so many presidents, vice presidents, political and world leaders gathered in one spot, naturally there was a high degree of networking, or whatever it would be called among figures at the highest levels of government.

Hillary Clinton gave Michelle Obama a long hug. Anthony Kennedy sat next to his successor, Brett Kavanaugh. Prince Charles sat in a row just behind German Chancellor Angela Merkel. As members of Congress crowded the south exit to chat and mingle after the service, the prince made his way down an empty aisle to exit through another door. Justice Samuel Alito and Kavanaugh followed.

Many of the VIPs sought to greet Jimmy Carter, who at 94 is now the oldest living former president. As he left the service, he shook hands with House Speaker Paul Ryan and gave hug to Ryan’s likely successor, Nancy Pelosi.

George W. Bush greeted the Trumps and all of the former presidents and first ladies, and at one point reached over the Trumps to give something to Michelle Obama, likely a cough drop. That evoked a moment from McCain’s funeral that was shared across social media.

Russell Levenson, the rector of St. Martin’s Episcopal Church in Houston, said in his homily that even though Bush’s passing has been referred to as the end of an era, it didn’t have to be that way.

“Perhaps this is an invitation to fill the void that has been left behind,” he said.

In his eulogy, Former Canadian Prime Minister Brian Mulroney said Bush played a critical and essential role in the aftermath of the collapse of the Communist bloc and later the Soviet Union, and credited him with ensuring the success of German reunification. He also talked of Bush’s environmental initiatives, including one to curb acid rain, and the passage of the Americans with Disabilities Act.

Alan Simpson, the former senator and one of Bush’s best friends, gave a few anecdotes about Bush’s often irreverent humor.

One evening he, Bush and their wives went to see Michael Crawford singing Andrew Lloyd Webber music, and on the way back to the White House they sang verses of “Don’t Cry for Me, Argentina” and “Phantom of the Opera.”

“A few days later he’s getting hammered by the press for some extraordinarily petty bit of trivia,” Simpson said. “And suddenly he sings out, “Don’t Cry for Me, Argentina.’ The press then wrote that he was finally losing his marbles.”

Simpson recalled the budget deal in 1990 that meant that Bush would raise taxes. During the 1988 campaign, he had famously paraphrased Clint Eastwood when he said, “Read my lips: No new taxes.”

Simpson said Bush told lawmakers that the deal “sure puts a hell of a lot of heat on me.”

The result was that “his own party turned on him,” and contributed to his defeat in 1992, Simpson said.

Bush, though, said, “when the really tough choices come, it is about our country, not me. It’s not about Democrats or Republicans, it’s for our country that I fought for.”