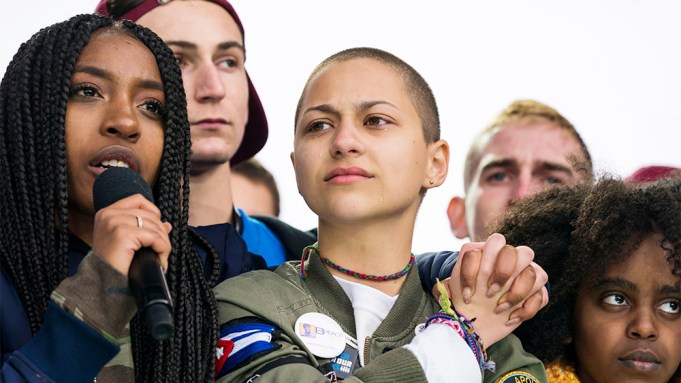 It is fitting that Emma González wears a leather choker with a Joan of Arc medallion. It was given to her by Father Edwin Leahy, headmaster of St. Benedict’s Prep in Newark, N.J., where she spoke with students in May about their experiences in a community that’s been ravaged by gun violence. Her visit came just three months after 17 students and teachers were gunned down at her own high school in Parkland, Fla.

When González was a child, her mother gave her a toy horse with a detachable Joan of Arc perched on its back. “My mom always told me that she was an inspirational French warrior who at a very young age was fighting for what she believed in,” says González. “I just loved the concept of a woman warrior on horseback with a flag.”

González’s mother could not have possibly anticipated that years later her daughter would earn her warrior stripes. But at age 18, after living through one of the worst mass shootings in American history, González became a fierce fighter in her own right.

Shortly after tragedy struck at Marjory Stoneman Douglas High School on Feb. 14, González and her fellow students established March for Our Lives, a nonprofit organization that advocates for gun reform laws and voter registration.

On March 24, González took the stage in Washington, D.C., for the first of many March for Our Lives rallies across the country, and read off the names of the victims killed at her school. She then fell silent for 6 minutes and 20 seconds — the amount of time it took for the lone shooter to complete his murderous rampage. Her nationally televised speech went viral; she became an instant hero.

Harnessing sorrow and rage into activism, the Parkland survivors galvanized a movement, giving voice to a young generation that could help shape culture and history.

This past summer, more than three dozen students, including 14 from Parkland, went on a nationwide bus tour dubbed Road to Change. They made more than 100 stops across multiple states, pushing for gun legislation and registering people to vote in the November midterms. Since Parkland, more than 50 guns laws have been passed and more than 10,000 voters registered.

González dismisses the notion that she and her fellow activists are anti-Second Amendment: “We’re not trying to take guns out of society. We’re trying to regulate them … make it mandatory for people to lock up their guns.”

While González will always be an activist, she has no designs on pursuing a life in politics. When asked where she sees herself in 10 years, she says, “Hopefully, finishing college!”

For a full Q&A with Emma Gonzalez, click here.