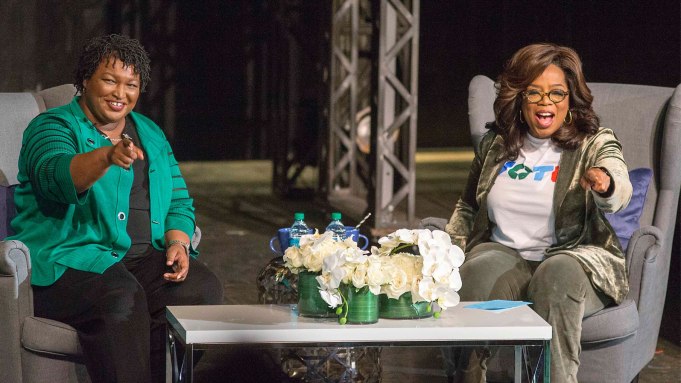 With midterms less than 24 hours away, celebrities are ramping up their online, and real life, campaigning. Big names such as Oprah Winfrey, Kristen Bell, Tiffany Haddish, and even Barbra Streisand have lent their voices across the nation to support the candidates of their choosing. Here’s a list of who from Hollywood is using their star power for politics.

Will Ferrell and Kandi Burruss

The “Talladega Nights” actor paid a visit to singer and “Real Housewives of Atlanta” star Kandi Burruss at her Old Lady Gang restaurant in Atlanta to team up in support of Georgia Democratic gubernatorial candidate Stacey Abrams. Ferrell has also been spotted going door-to-door canvasing for Abrams.

Haddish was seen on Instagram alongside “Night School” producer Will Packer, rapper Ludacris, and model Kourtney Jorge supporting Abrams, who could become the first black woman governor in American history.

“No one paid for me to come here,” Winfrey said in a speech in Marietta, Ga., on Abrams’ campaign trail. “I came for myself and I approve this message.” Winfrey has also committed to door-to-door canvasing in support of Abrams, who is locked in a heated race against Georgia Secretary of State Brian Kemp.

Rapper and actor Common has also come out in support of Abrams. “She is a phenomenal candidate and person and she can make history by becoming the first ever black woman elected Governor in America,” the rapper shared in an Instagram post earlier this week.

The newly political Taylor Swift took to Instagram urging her followers to get out and vote, specifically for Tennessee candidates in her home state. “I will be voting for Phil Bredesen for Senate and Jim Cooper for House of Representatives,” Swift wrote. And her political words were clearly heard, as Vote.org reported a spike in Tennessee voter registration immediately after her first post.

Britton has posted videos to Twitter in support of multiple candidates, including three from Texas: John Bucy for State Representative of Texas, Beto O’Rourke for Texas State Senate, and Colin Allred for Congress.

Loved being in TX this weekend for @BetoORourke and @ColinAllredTX & was great to meet so many impressive candidates like @BucyForTexas running for local seats. These are the offices that will impact your daily life as much as any so remember VOTE ALL THE WAY DOWN THE BALLOT! https://t.co/EMB03MncoC

Rapper Travis Scott came out to a rally in Houston to express his support for O’Rourke for Texas State Senate and encourage young people to get out and vote.

Since August, basketball superstar Lebron James has been vocal on Twitter about his support for O’Rourke. And on Oct. 27, James made his support even more visible by sporting a “Beto for Senate” hat ahead of the Lakers’ game against the San Antonio Spurs.

A Must Watch!!! 🙏🏾💪🏾💯‼️ Salute @BetoORourke for the candid thoughtful words! https://t.co/E1YrbqGciZ

A powerful group of women (many of whom flew to Texas to stump in real life) lent their support to O’Rourke using the #LatinasStandUp hashtag.

The country music legend took his support for O’Rourke one step further, by performing at a Turn Out for Texas Rally in Austin, Texas, on Sept. 29. Nelson also appeared on stage with the candidate while wearing a “Beto U.S. Senate 2018” shirt.

Actor and outspoken environmental and political activist Mark Ruffalo has also joined the army of celebrity voices behind both Abrams and Beto, but he has also thrown his support behind Antonio Delgado who is running for Congress in New York.

I'll be voting for Antonio Delgado in #NY19 tomorrow and you should, too. @DelgadoforNY19 pic.twitter.com/ImFguvbakw

Katie Hill shared on her Twitter a video of Bell’s endorsement for the Democrat in the House race in California. “She has actual years under her belt fighting, giving others a voice. And she’s going to do the same for you,” Bell said. “The Good Place” actress pledged that she and her husband, Dax Shepard, will each donate $5,000 to Hill’s campaign.

Thank you @IMKristenBell for your support! Like Kristen said, I'm not taking corporate money so I'm relying on individual support from people like you! Donate Here: https://t.co/Jen0bN2c5J Help us flip the #CA25 blue and #electwomen to Congress. The time is RIGHT NOW! pic.twitter.com/Ezx3hotY4B

The Grammy winner has been prolific in his campaign efforts for Amara Enyia’s race in the Chicago mayoral election. On Oct. 16, the rapper hosted a press conference to officially announce his support, and has hosted “Pull Up” rallies throughout the city and appeared with the candidate on local news to garner public support. A week after his endorsement, Kanye West donated more than $73,000 to her campaign.

@chancetherapper is helping us get on the ballot, and YOU can help us too! Watch for upcoming events to hear @AmaraEnyia’s ideas for creating a better Chicago, and grab a petition packet to sign up your family, friends, and neighbors!#AmaraForChicago #AllPeopleAllVoicesOneCity pic.twitter.com/r9WZnbMEo3

Ross has supported numerous candidates around the country, including Andrew Gillum for governor of Florida. The “Black-ish” actress has even participated in a roundtable with director Lee Daniels and Gillum’s wife, R. Jai Gillum, to discuss voting rights and criminal justice.

Milano has been one of the most prominent members of the #MeToo movement, and her political activism has extended to an endorsement of Gillum. On Sept. 29, the “Charmed” star spoke at a rally in Hollywood, Fla., to support the gubernatorial candidate in his race against U.S. Rep Ron DeSantis.

Hello, Florida! I’m going to be spending the day volunteering with your next Governor, @AndrewGillum.

The actress and comedian revealed a long list of candidates she’s backing in the midterms, tacking on at the end the announcement that she was pregnant with her first child. The roster included Kirsten Gillibrand for Senate and six other New York politicians, as well as Gillum, O’Rourke, Abrams, and more, proving that sometimes a little gossip “noise” can be used for news.

I'm in the business of covering news not noise, but sometimes some happy noise comes along and you just have to share… Congrats @amyschumer!! 👶👶👶https://t.co/vewOWx5nel pic.twitter.com/RT5jjtbtOn

This summer, the “Transparent” actress partnered with Swing Left, a progressive political group, to help voters volunteer in swing districts that are closest to them. She also went door-knocking in her home state of Ohio for Congressional candidate Danny O’Connor before announcing her support for Hill, another Congressional candidate looking to flip a traditionally Republican-held House seat in California.

In January, singer and actress Cher tweeted her endorsement of Democratic state Rep. Paulette Jordan in the race to become Idaho’s next governor. In the tweet, Cher wrote that she met Jordan at a Las Vegas rally, before praising the candidate, calling her “a thoughtful, caring, intelligent woman.”

I Met & Talked With Paulette At LAS VEGAS WOMENS RALLY.I Believe The PPL Of IDAHO Would Be WELL SERVED With Paulette Jordan As Their Governor.She is a thoughtful, Caring,Intelligent,Woman,Who Would Work TIRELESSLY 2 BENEFIT”ALL THE PPL”Of IDAHO❤️

Kid Rock made an appearance at a John James Senate campaign rally to show his support for the Republican candidate. “I 100% am here to endorse and do everything I can to make sure John James gets into the U.S. Senate,” he said. “I like James because he realizes that we need to invest in education, stop the hand outs, put people to work and protect our borders and enforce our laws.”

The “Single Parents” actress got specific on the red carpet, urging voters to consider Justin Kanew, who is running for Congress in Tennessee’s 7th District. “He’s grassroots, no big money. He is just an awesome, good guy,” Meester said. “[This is] his first venture into politics. He is representing Nashville, and hopefully will win [in] November.”

The singer and star is also doing her part to push her fanbase toward voting. Streisand released a message via GLAAD for the members of the LGBTQ community urging everyone to get up, get out, and vote.