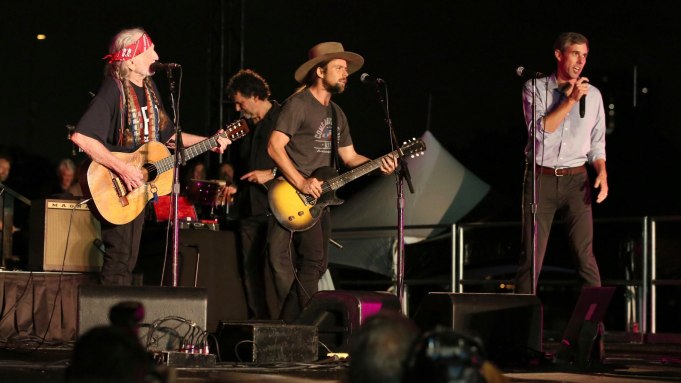 Lin Manuel Miranda, Natalie Portman, Maggie Gyllenhaal and Adam Scott are among the entertainment figures who plan to appear at rallies or canvass in the final days before the midterms, while Cake, Steven Stills and The Flatliners are headlining a concert on Tuesday for Beto O’Rourke.

Most of the celebrities are trying to get Democrats elected, a reflection of the lopsided nature of Hollywood’s political giving. According to the Center for Responsive Politics, of the $35.2 million that donors in the industry have given to federal candidates, 79% went to Democrats and 21% to Republicans.

O’Rourke’s campaign will hold a fundraising concert on Tuesday in Irving, Texas, with a lineup that also includes Ryan Bingham and Hayes Carll. The campaign is asking for donations of $25 per person for the event at the Toyota Music Factory.

On Thursday, the progressive group Swing Left is launching a series of events to kickoff a weekend of canvassing and voter outreach in 84 swing districts.

The group is planning canvassing events from Friday through Election Day. Lin Manuel Miranda will kick off an event in New York on Saturday, and others who plan to knock on doors include members of the original cast of “Hamilton,” Kyra Sedgwick, Natalie Portman, Clark Gregg, Rachel Comey and Jordan Roth.

Republicans also have deployed celebrities to the campaign trail this cycle, even as they have tried to turn Democrats traditional showbiz support against them. Kid Rock was among the headliners of a rally on Oct. 17 for John James, who is seeking to unseat Democrat Debbie Stabenow.

Much of the activity in the final days before the midterms is centering on get-out-the-vote efforts, which is a much subtler way of deploying celebrities on the trail and getting a dose of publicity. Last week, Will Ferrell knocked on doors and campaigned in Georgia for Stacey Abrams, who is in a tight race for governor against Brian Kemp.

Will Ferrell spent yesterday in Plains encouraging voters to vote early for @staceyabrams, @SarahRiggsAmico, and all #GADems.

After you vote early, sign up to volunteer: https://t.co/jGIScpYhl8 pic.twitter.com/df7g6gvrOO