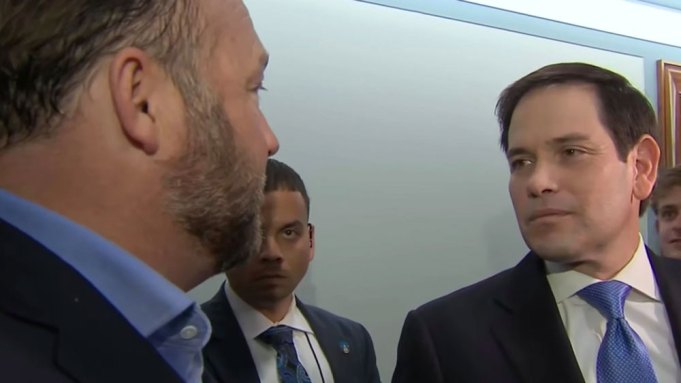 Senator Marco Rubio engaged in a heated exchange with conservative conspiracy theorist Alex Jones during a press conference outside a Senate hearing on Wednesday.

During an interview with a group of reporters, Jones interrupted Rubio, calling him a “frat boy” and “a little gangster thug,” after Rubio tried to brush off his comments about social media platforms’ “purge of conservatives.” Jones continued to heckle the senator throughout the interview until the confrontation escalated when he touched Rubio’s shoulder.

“Well, sure, I just patted you nicely,” Jones responded before asking if the senator was going to have him arrested.

“Oh, you’ll beat me up. Look at him, he’s so mad,” Jones replied. “You’re not going to silence me. You’re not gonna silence America. You are a little gangster thug. Rubio just threatened to physically take care of me.”

The press conference was held outside a Senate hearing in which Facebook COO Sheryl Sandberg and Twitter CEO Jack Dorsey testified about the work they’re doing to combat foreign campaign interference via tech firms.