Solid and generally satisfying, but not the best from either. 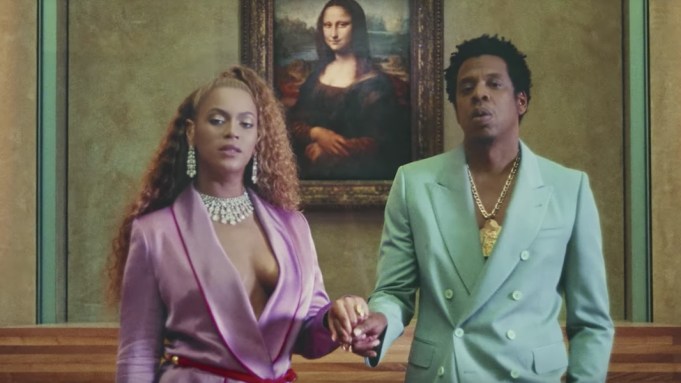 With “Everything Is Love,” the three-season musical miniseries about Beyonce and Jay-Z — a.k.a. the Carters — reaches a happy ending. It’s both a completion — of the marriage trilogy that began with Beyonce’s 2016 album “Lemonade” and her widely discussed accounts of Jay’s infidelity — and a continuation, with his tales of contrition on last summer’s “4:44.”

As with such a triumphant denouement, everything about this long-rumored tag-team album from America’s first couple, which arrived with little warning on Saturday afternoon, speaks to marital unity, equality, fairness, forgiveness and redemption. It’s officially credited to “The Carters,” which may include their children, who are mentioned in many of the songs. Eldest Blue Ivy even shouts out to her younger twin siblings, Rumi and Sir, between tracks.

That message of familial parity carries over to the way the two share the spotlight. Their participation in the visuals, the album’s first video (for the song “Apesh–“) and even the vocals, is almost completely 50-50: If one takes the lead for a song or two while the other adds a verse or hook or bridge, they swap roles for the next. The closing track “LoveHappy,” with a classic soul sample from Phoenix Express’ 1971 song “You Make My Life a Sunny Day” (via Killer Mike’s “Ric Flair”), is a victory lap, with Beyonce singing, “Sometimes I thought we’d never see the light … Damn, look at us now / We came, and we conquered, now we’re happy in love.” It’s probably no coincidence that this family affair dropped during Father’s Day weekend.

Before we dive deep into the narratives, most importantly, how does it rate as an album? Solid and generally satisfying, but not the best from either. Both artists’ high standards guarantee that the songs are musically and melodically on point, with a top-shelf team of collaborators that range from established (Pharrell, Cool & Dre, Boi-1da) to left-field (TV on the Radio’s Dave Sitek, who worked on Solange’s 2016 opus “A Seat at the Table”) to relative newcomers (Vory, Jahaan Sweet and Sevn Thomas); Migos guest on “Apesh–.” Jay’s flow and lyrics are smooth as ever, and Beyonce — who never releases an album without giving herself new challenges — is rapping far more often than before, trying on a couple of new voices and even, on “Friends,” using autotune to twist her vocal into new shapes.

The album covers a wide variety of styles — from a banger like the single/video “Apesh–” to the soulful “Boss” to the softer “Friends” and “Heard About Us” — over an uncharacteristically brief 40-odd minutes and 10 songs (including “Salud,” a “bonus track” that does not appear in the album’s sequence and is exclusively available on Tidal).

The lyrics are more problematic. As always, they’re dense with subplots and deep references and social-media feeding Easter eggs, but they’re also self-referential and uncharacteristically (for Beyonce, anyway) self-obsessed. We get more mea culpas from Jay, more warnings from Bey, and he takes a wistful look back at their long courtship, recalling when they first spent time together on a flight back from a 2000 MTV appearance in Mexico (“We played it cool at the pool of the Cancun, VMA… Fate had me sittin’ next to you on the plane/ And I knew straight away”). There are also references to lyrics from other rappers ranging from Lil Wayne and Chief Keef to Mos Def and Notorious B.I.G., and also some shade apparently thrown Kanye West’s way in “Friends,” with a reference to Jay’s non-attendance at his wedding (“I ain’t goin’ to nobody nothin’ when me and my wife beefin’/ I don’t care if the house on fire, if I’m dyin’, I ain’t leavin’”). Jay also slams the Grammys and the Super Bowl in “Apesh–,” referencing both his refusal to perform during the 2018 halftime show, and him receiving zero Grammy awards despite eight nominations earlier this year: “Tell the Grammys f— that 0 for 8 s— / Have you ever seen the crowd goin’ apes—?”

For her part, Beyonce throws shade at various unnamed b—hes and hoes, and in “Nice,” at Spotify.  Addressing the oft-noted fact that she passed up millions of dollars in streaming income by giving the company exclusive streaming rights to “Lemonade,” she claps back: “My success can’t be quantified / If I gave two f—s about streaming numbers / Would have put ‘Lemonade’ up on Spotify / F— you, f— you.”

But mostly, they’re boasting about how rich they are, in a way that at times feels redundant if not beneath them, as if they’ve fallen prey to the same pettiness that plagues Taylor Swift’s latest — stooping to haters’ level instead of rising above it. Anyone hearing this album knows the Carters are an unprecedented phenomenon; knows they’re the billion-dollar couple; knows what titanic odds they overcame to get to where they are; and knows that their success is a statement in itself. “No need to ask [if] you heard about us,” Beyonce sings at the beginning of “Heard About Us.” So why does it even need saying?

To be fair, there are multiple references to race and some current events in the lyrics, although they too are usually contrasted with “Look at us now”-type sentiments (like in “Black Effect”: “I pull up like the Freedom Riders, hop out on Rodeo [Drive in Beverly Hills’ shopping district]”). And while Jay twice mentions Trump — who attacked him on Twitter more than once, writing, “his language was so filthy that it made me, like, the most clean-cut human being on earth” — one is a passing reference and the other isn’t even on the album proper, but buried in the middle of the self-congratulatory bonus “Salud.”

“Your president tweeting about Hov like he knows us
My road to the top was to take what you owe us
I give a f— what that man find vulgar
Just look in my eyes when you toast us.”

Yes, bragging is a cornerstone of hip-hop, artists are under no obligation to make their work political, and it’s not as if any of the Carters’ boasts are inaccurate. And sure, they deserve the anniversary present to themselves that this album largely amounts to. But with all the horrible things happening in the world, and the platform they have and the causes they espouse, are Lambos and private jets and designer brands really what they want to be using that platform to talk about? What would the world, let alone the streets, be saying if Bey flipped off the president instead of Spotify?

Indeed, the most interesting thing about “Everything Is Love,” which feels like a light dessert after “Lemonade” and Beyonce’s deeply Afro-centric Coachella performance, may be what comes next.