Pusha T vs. Drake Isn’t a War of Words, but of Pictures

For all the bluster and verbal clap-backs between Pusha T and Drake, a feud dating back several years that’s escalated to multiple diss tracks just in the last few days, the war between these two rappers is not just one of words, but of images.

Pusha, for his part, made sure of that by using a tabloid photo of Whitney Houston’s bathroom that ran in the National Enquirer back in 2006 (the headline: “Inside Whitney’s Drug Den!”) as the cover art to his new album, “Daytona.” Or should we say, Kanye West, the album’s producer and financial backer, who reportedly paid $85,000 to license the image, did.

It’s a provocative picture. Taken by Houston’s longtime friend and ex-sister-in-law Tina Brown six years before the singer’s death, it served as evidence of a destructive addiction. You can clearly see traces of crack cocaine, various paraphernalia, empty beer cans and cigarette packs — the remnants of a drug “binge,” as the tabloid captioned at the time, where Houston would reportedly “lock herself away for days.” 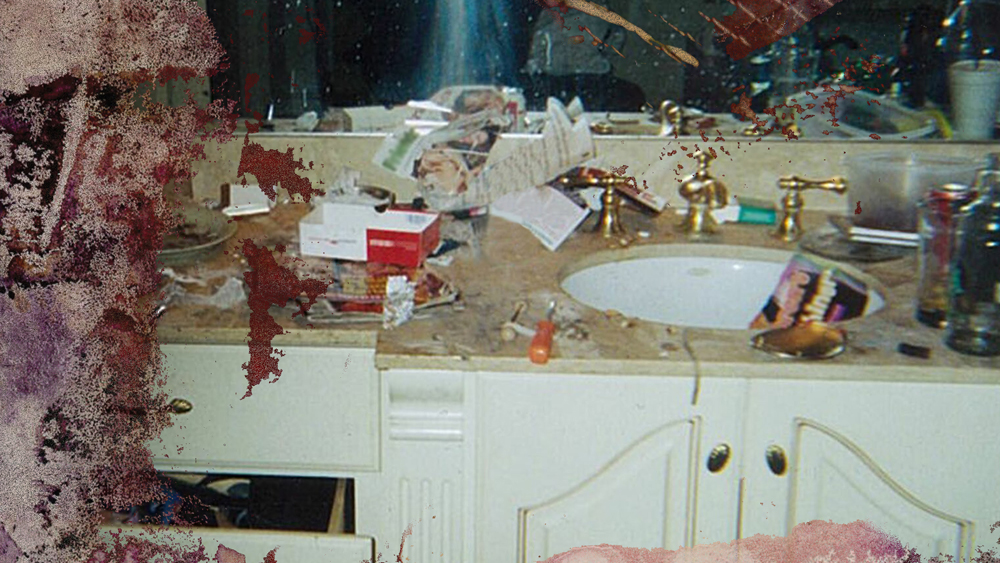 Not to be outdone, days later Pusha released the track “Story of Adidon,” in response to Drake’s “Duppy Freestyle” (read about the back-and-forth here, here and here) and accompanied the Soundcloud stream with a photo of Drake in blackface.

The equally startling visual features Drake wearing a shirt from the 2008 “Jim Crow Couture/House of Crow” collection of Toronto fashion line Too Black Guys. According to the brand’s founder Adrian Aitcheson, who provided a statement to media in the hours after the track’s release, “We feel that Drake, who is a longtime friend of the brand, was brilliantly illustrating the hypocrisy of the Jim Crow Era. … The subtleties of Drake, a young black man, mimicking how white men used to mimic and dehumanize black people may be lost in a rap battle but we should not be distracted from the issues that are still affecting our communities.” (Drake has since addressed the origin of the image, writing on Instagram, “This picture is from 2007, a time in my life where I was an actor … working on a project about young black actors struggling to get roles, being stereotyped and typecast.”)

But aren’t these images in and of themselves distracting? Doesn’t the visual of the bathroom take away from the branding of the artist and make the album about something else? Even the “invoice” Drake posted on social media on May 25, charging Pusha $100,000 for “promotional assistance and career reviving,” was as much something to look at as it was a statement to think about.” The plainness of a bill for services rendered, correctly charged to the right Def Jam executive, elicited a visceral reaction.

“Whether it’s a news image, a tabloid photo, or a produced portrait, pictures have power, and they resonate in peoples’ minds,” says veteran photo editor Meg Handler, editor-at-large at Reading the Pictures. “A photo drives the person looking at it to make all kinds of assumptions about reality. So, what are we to think of Pusha T and Kanye deciding to re-contextualize [the Houston] image? Is Pusha trying to sell himself as Whitney’s ‘pusher?’ Is he promoting the idea of controversy? The reasoning behind it should be deeper than just an attempt at getting publicity. Kanye and Pusha must have known how offensive using this particular image would be, and that there would be a strong possibility of it backfiring.”

In the case of Drake in blackface (shot by Toronto photographer David Leyes, though it’s unclear if the image was properly licensed for “Adidon”), public sentiment seems to suggest that it has backfired already. Adds Handler: “Seeing a black man, in black face, in color, could not be more jarring. It’s in poor taste, but moreover, it messes with the American psyche.”

Indeed, one high-ranking urban music executive notes that, while the Pusha-Drake-Kanye feud is “good for hip-hop,” the art “is distasteful” and “goes too far.” Says the insider: “It’s offending peoples’ families and children; a lot of lives are being affected. Better to leave it on wax.”

Many in the industry are quick to note that a rap battle in 2018 isn’t all that different from Jay-Z and Nas hitting below the belt two decades prior. But then, they didn’t have the insta-images to go with the punches, or the political correctness that dictates our every tweet. Says the insider: “Look at the Roseanne Barr fallout, there’s extreme sensitivity right now. These guys have just gotta stop.”