Will Kanye’s ‘Superman’ Trump Bromance Be Kryptonite to His Legacy? 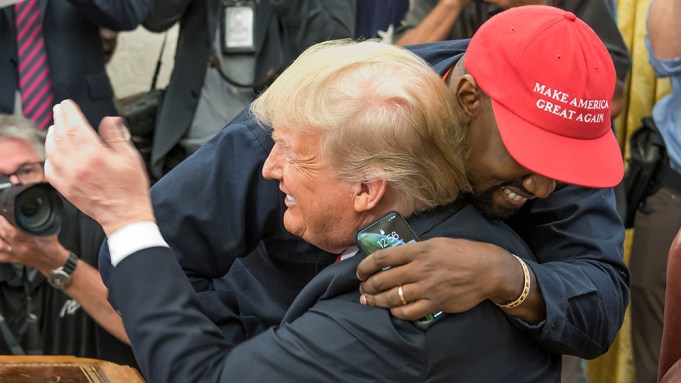 Kanye West recently announced that he was delaying “Yandhi,” his hotly anticipated next album — hotly anticipated by Diamond and Silk, anyway — until Nov. 23. But West may have the first fan base in the world to hope that their hero delays a project much, much longer than the artist himself anticipates. How about 2021? Maybe 2022? Could we all take a deep breath and pencil in early-to-mid-next-decade as a rough release date?

Because that might allow West sufficient time to calm down and go back on the meds he keeps announcing he’s forsaken; go cold turkey from his media-manipulation addiction; make a record that doesn’t sound like he finished it moments before servicing it to Tidal, even if he did; re-embrace whatever amendments to the constitution he may have railed against at that point; and hug it out with Pete Davidson, who by then will be on his second or third post-“SNL” movie, but return to the show as guest host to have a kumbaya moment with West, America’s beloved and healthy comeback kid.

In the meantime, we have a hip-hop kingpin whose core audience got to watch him step into the Oval Office with the president Thursday and, in front of reporters and the world, reaffirm his commitment to abolishing the part of the constitution that abolished slavery. This is not a good career move if you’re Molly Hatchet. It’s a less good one if you’re going from being the rap god who said George W. Bush doesn’t care about black people to the walking puzzle who suggests Donald Trump is the best friend people of color have.

“There’s a lot of things affecting our mental health that makes us do crazy things,” he said Thursday — so far, so good — “and puts us back into that trap door called the 13th amendment.” If you thought he was about to walk back his apology for misspeaking on that matter, collect your bet. “I did say ‘abolish’ with the (MAGA) hat on, because why would you keep something around that’s a trap door? If you’re building a floor, the constitution is the base of our industry, right — of our company? Would you build a trapdoor that if you mess up and something accidentally happen, you fall and you end up next to the Unabomber? You got to remove that trapdoor out of the relationship. And I think the way the universe works is perfect. We don’t have 13 floors, do we? So the four gentlemen that wrote the 13th amendment didn’t look like the people they were amending. Also, at that point, it was illegal for blacks to read, or African Americans to read. So that meant if you actually read the amendment, you’d get locked up” — he clapped his hands together — “and turned into a slave!”

If you chose to, you could almost find a kind of strange logic in what West was trying to get at, which maybe is: Having a law against something gives that forbidden thing power, as if it could exist again, by an undoing of the law, so better to not dignify the core injustice by having any sanction at all. It kind of makes you wonder about the mind-boggling possibilities of West as a Supreme Court justice. (Which actually seems like a Thing That Could Happen.)

We also had West, poster boy for the men’s movement, saying Hillary Clinton castrated his desire to throw a ball with his son. If we’re interpreting correctly.

“You know, they try to scare me into not wearing this hat — my old friends,” West said. “But this hat, it gives me power, in a way. You know, my dad and my mom separated, so I didn’t have a lot of male energy in my home. And also I’m married to a family that, you know, not a lot of male energy going on. It’s beautiful, though. But … I love Hillary; I love everyone, right? But the campaign ‘I’m With Her’ just didn’t make me feel — as a guy that didn’t get to see my dad all the time — like a guy that could play catch with his son. There was something that when I put this hat on, it made me feel like Superman.” He looked to Trump. “You made a Superman. That’s my favorite superhero, and you made a Superman cape for me.”

Then there was the subject of mental illness … something that, in his case, was all just a huge mistake. “I was diagnosed with bipolar disorder. I was connected with a neuropsychologist that works with the athletes in the NBA and NFL … He looked at my brain … I’m gonna go ahead and drop some bombs for you. 98 percentile IQ test; I have a 75 percentile of all human beings whether it’s counting eight numbers backward…” The mere 75th percentile on backwards numbers is not a good thing, he elaborated, “so I’m gonna work on that one. The other ones, 98 percentile, (like) Tesla, Freud. So (the neuropsychologist) said I wasn’t actually bipolar! I had sleep deprivation, which we call dementia; 10 to 20 years from now I wouldn’t even remember my son’s name … What we need is, we can empower the pharmaceuticals and make more money. That’s one thing, I’ve never stepped into a situation where I didn’t make people more money.”

Only one thing was missing from this attention-deficit TED talk: illustrations, held up on a phone for everyone (okay, basically no one) to see. “I brought a GIF with me right here,” he announced. “This right here is the iPlane 1. It’s a hydrogen-powered airplane and this is what our president should be flying in. … We’re gonna have Apple, an American company, work on this plane with me. But you know what I don’t like about…” He was about to speak of Lorne Michaels and the crew at 30 Rock, and he wanted to refashion his words so as not to offend them. “What I need ‘Saturday Night Live’ to improve on, or the liberals to improve on, (is): If he (Trump) don’t look good, we don’t look good. This is our president. He has to be the freshest, the flyest, the flyest planes, the best factories.”

At some point, he ran out of breath, at which point Trump interjected, “I’ll tell you what, that was pretty impressive … what do you do after that?” It was difficult to tell if the president was secretly horrified, as almost anyone who had let a man into the room to rally against the 13th amendment and talk about the Unabomber would be, or if truly was impressed that West had managed to cover as many subjects in six minutes as he does in a 65-85-minute extemporaneous rally speech.

But West was right in at least one inference — the one about “if he don’t look good, we don’t look good.” If West takes over a press conference sounding like … well, let’s be kind and say he hasn’t had enough sleep … then Trump, in indulging him, also comes off like a guy who doesn’t get enough shut-eye. Meanwhile, if Trump seems like the enemy to the vast majority of African Americans, and at least a simple majority of the white listeners who massively consume hip-hop, can West seem like anything but an enemy, too, for however long the toxic shelf life from this quizzical embrace lasts?

But in considering the question of how this will affect West’s sales, whenever “Yandhi” comes out, the answer has to be … first of all, what sales? We live in a world of streaming music where CDs and even paid album downloads are increasingly exceptions to a rule, and any curiosity about new music can be sated without laying out any more cash than you already have, if any, for a subscription. So expect the world to consume just as voraciously as they have albums West might have made when he was in a better or less alienating frame of mind. We will all tune in to listen to the album, and he will add to that billion-dollar pile of cash he bragged about. That’ll happen even if everyone is hate-watching the Kanye Show, as it were.

West doesn’t differentiate much between contempt and love, of course, just like the man across the desk in the Oval Office believes all attention is good attention. But at some point, sooner or later, in your personal life and your career, you don’t just want merely the attention of the crowd that’s standing in for an absent dad. You want them to play catch.