Variety has the premiere of Guthrie's own "Hoodoo Voodoo," a lyric Wilco and Billy Bragg rightfully assumed they were first to set music to. 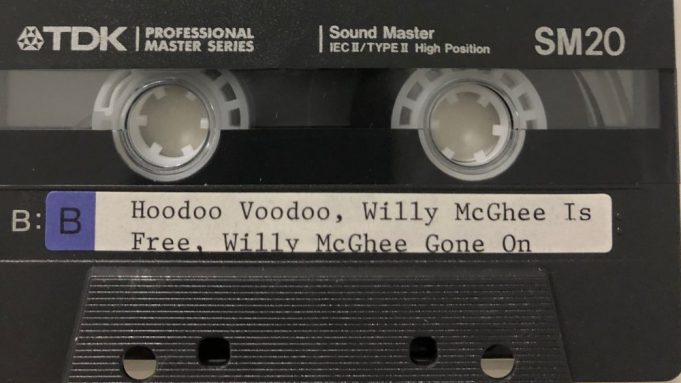 Among the many reasons to celebrate Jeff Tweedy right now — including his first real solo album, “Warm,” and a new memoir, “Let’s Go (So We Can Get Back)” — it’s worth throwing a 20th anniversary party for “Mermaid Avenue,” the landmark album he and his band Wilco recorded with Billy Bragg in 1998. There was a third partner in the collaboration, of course: the late folk hero Woody Guthrie, who left behind a batch of lyrics and unfinished prose sketches that Wilco and Bragg turned into full-blown songs more than 40 years after his death.

It was assumed that Guthrie never set these words to music himself, or if he did, he never got around to recording them. But even with the folk legend being gone for more than a half-century, there are still discoveries to be made. Wouldn’t it make a grand 20th anniversary gift for “Mermaid Avenue” if we were to discover that Guthrie did record a version of one of those songs that Wilco and Bragg thought they were the first to set music to, after all?

That’s exactly what’s happened. One reason for reconsidering “Mermaid Avenue” here is that I recently discovered some old tapes of rare Woody Guthrie material while working at the Shel Silverstein Archive. One of the songs happened to be “Hoodoo Voodoo” — an exciting find since until now there weren’t any known performances of Woody doing any “Mermaid Avenue” material. The Woody Guthrie Archive has verified it. So what we have is what might sound to some young ears like a very offbeat cover of a Wilco song, although the limitations of time travel tell us that this is very much Guthrie’s alone.

It was quite a surprise when I stumbled upon the recording of Woody singing this cute little children’s song — a far cry from Wilco’s frantic version, to be sure. The performance is rougher than we might wish, as Guthrie and his cohorts, bluesman Sonny Terry and Ramblin’ Jack Elliott, had been doing a fair amount of drinking when they made the informal recordings in 1954. Be that as it may, Variety can now present, for the first time, Woody Guthrie singing “Hoodoo Voodoo.”

A great deal more sobriety went into the classic performances that are “Mermaid Avenue,” an album that bears some recollecting here.

“Mermaid” was created at the behest of Woody’s daughter Nora Guthrie, then-director of the Woody Guthrie Foundation and Archive. Her father had left behind a trove of song lyrics with no real music to speak of, and it was her hope to share them with musicians who’d help make Woody’s spirited lifework more relevant to a fresh generation of listeners.

Nora Guthrie made the sage move of inviting British folk-punk troubadour Billy Bragg to collaborate after seeing him perform at a New York City concert honoring Woody. Nora’s bid for Bragg’s involvement was an obvious call, as the singer was a musical purist, a political activist and, in the spirit of Woody, always ready to sing out for a worthy cause.

It was Bragg, then, who induced Tweedy and Jay Bennett (now deceased) to bring their band Wilco into the nascent Guthrie project. Wilco was still considered a promising alt-country outfit just broadening their range after two albums, but Bragg grasped the depth of Wilco’s fledgling indie/roots/folk/rock/pop sound and brought them on board.

With Nora’s encouragement, Bragg plus Tweedy, Bennett, Ken Coomer and John Sirratt created the record (mostly in Chicago and Dublin, Ireland) with help from guitarists Corey Harris and Bob Egan, singer Natalie Merchant and English fiddler Eliza Carthy — all energized and illuminated by Woody Guthrie’s peculiar/progressive brand of Americana. It is said that Bennett was initially more enthused than Tweedy about creating new Woody Guthrie tunes with Bragg, and to his credit, Bennett co-wrote a fair amount of the music on “Mermaid Avenue,” including “California Stars,” a soaring Wilco anthem with a perfect Tweedy vocal.

Named for a Woody Guthrie song as well as the Coney Island street where Woody lived in the late 1940s and early 1950s, “Mermaid Avenue” was well received critically and commercially, garnering a Grammy nomination and a rave review from Greil Marcus in Rolling Stone, among many others. It was also popular enough to justify a 1999 film documentary tracing the storied collaboration, “Man In The Sand.” More of the recording sessions were then released in 2000 as “Mermaid Avenue Volume II,” and “Volume III” was ultimately included as part of the 2012 boxed set “Mermaid Avenue: The Complete Sessions.”

Songs on the original 1998 collection featured Bragg with and without Wilco, while other tracks were performed by Wilco alone. In the spirit of fairness, Bragg and Tweedy shared the lead vocal duties pretty evenly. Bragg-led songs like “Walt Whitman’s Niece” and “I Guess I Planted” are rousing group efforts, while Bragg’s solo adaptation of “Ingrid Bergman” is more internal and quixotic. Another highlight, “Way Over Yonder in the Minor Key,” is Bragg fronting Wilco sans Tweedy, shoring up Woody’s prose with a timeless melody, Natalie Merchant’s counterpoint vocal, and Eliza Carthy’s and old-fashioned fiddle.

Wilco mostly rose to the occasion and conjured the far-reaching voices of Woody Guthrie on “Mermaid Avenue.” Notable Tweedy adaptations include the countrified ballad “One By One” and the jovial folk-rock of “Hesitating Beauty.” The album’s most rocking song is “Hoodoo Voodoo.” It’s just a jiving little kid’s tune but the band is all in, banging it out with a riff lifted straight from “Lady Madonna.” Embracing the nonsense lyrics and topsy-turvy wordplay, Tweedy gleefully shreds his voice into a pleasing, wheezing rasp.

In the end, “Mermaid Avenue” achieved what Nora Guthrie had hoped to accomplish: bringing awareness and appreciation of Woody Guthrie to new frontiers. The collection was also a great leap forward for Billy Bragg, and something of a turning point for Wilco, who then completed their third album “Summer Teeth” using digital ProTools, a Mellotron and far more overdubbing than they had employed previously — a path they’ve continued on ever since. Jay Bennett is long gone now, and only Tweedy and Sirratt endure from that old Wilco squad. Perhaps Billy Bragg and Jeff Tweedy did not part company as close friends after making “Mermaid Avenue,” but they did do something together that still sounds right twenty years on.

Not only that, but we’re discovering more about Woody Guthrie, even at this late date. “Hoodoo Voodoo” was not the only song on this rough tape. Two other less frolic-some songs focus on a man named Willie McGhee, an African American man from Mississippi who was sentenced to death in 1945 for raping a white woman, and was executed in 1951 after a Communist-affiliated group paid for his defense. Clearly, Guthrie must had been keenly aware of these events.

Upon being given the tape of “Hoodoo Voodoo” and the other two songs recently, Smithsonian-Folkways Guthrie expert Jeff Place authenticated the performance, placing the session as likely being from 1954 when Woody, bluesman Sonny Terry and Ramblin’ Jack Elliott taped a number of tunes for Folkways honcho Moe Asch. The performances don’t represent peak Guthrie, by any means: Woody was ill with Huntington’s disease by that time; he had also burned his arm quite badly, and they all got drunk while making the recordings. But for fans not just of the folk legend but the musicians who honored him in 1998, it’s a kick to have “Hoodoo” in any form, as an unexpected chance to “A/B” different versions of the tunes at 20- and 60-year distances.