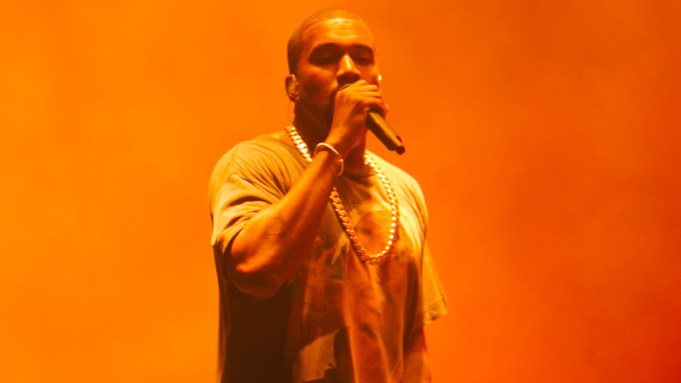 The suspense surrounding Kanye West’s new album continues. According to West’s Twitter, fans can watch a livestream of the album listening party he is hosting at his Wyoming ranch.

West wrote on Twitter that fans can download the WAV Media app to watch the livestream, which is taking place in Jackson Hole, Wyo. and goes live at 7 p.m. PST.

The rapper invited a delegation of media representatives to experience the listening party in person ahead of the release of his latest album, whose title hasn’t even been officially announced. West had the idea last Friday to fly a planeload of media, radio, DJs, and other influencers to Wyoming to hear his new album — yes, the Friday before Memorial Day weekend. Check out live updates from the listening party here.

Fans can also listen to the album and participate in an “exclusive communal discussion” on the Stationhead app beginning at midnight on June 1.

The media corps landed in Jackson Hole and were en route to the ranch as of 5:30 p.m. PT, where they’ll hear the album. According to our reporter, “It’s absolutely breathtaking — mountains and trees as far as the eye can see. As we left our luxurious and unexpected private jet, one fellow traveler said, ‘After all this, we’re gonna HAVE to say Kanye’s album is fire…'”

Download the @WAV_Media app https://t.co/HxSvFHiSrY  to watch the livestream of my album listening tonight in Jackson Hole, Wyoming 7PM MDT