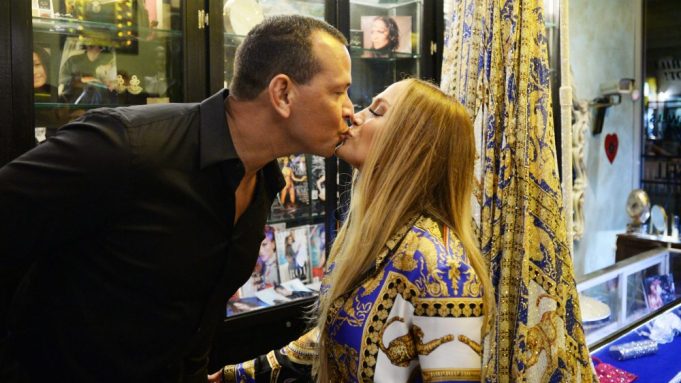 The celebrating didn’t stop when the credits rolled at the end of the MTV Video Music Awards.

Jennifer Lopez headed downtown to the Lower East Side’s Beauty & Essex to toast her Vanguard Award. The front of the hot spot was decked out with her various wardrobe changes from her VMA performance on dress forms along with glossy photos and magazine covers displayed inside the glass cabinets along the walls.

Her longtime manager, Benny Medina, waited patiently at the door for J.Lo’s arrival. Later on, he delivered a heartfelt speech and asked everyone to raise their glasses in honor of Lopez.

Inside the bash, at about midnight, Lopez was greeted by guests chanting, “Jennifer, Jennifer…” She hugged Melissa Gorga of “The Real Housewives of New Jersey” as did Lopez’s producing partner Elaine Goldsmith Thomas.

In the back of the house, Lopez cut into a gold Moon Person cake. Her boyfriend, Alex Rodriguez, was by her side most of the evening, but took time to also mingle with guests.

White and gold balloons and white flowers decorated the joint as wait staff offered a menu of bite-size empanadas, avocado toast, and mini meatballs. Specialty cocktails were named in honor of Lopez’s hit singles, including the Jenny from the Block, a mix of Stoli vodka, earl grey tea, lemon, and mint syrup. Going almost unnoticed was Charlie Walk, the former Republic Group president accused by several women of sexual misconduct, claims he denied when they first serviced in January.