VMAs: All the Off-Camera Action Inside Radio City Music Hall and Backstage 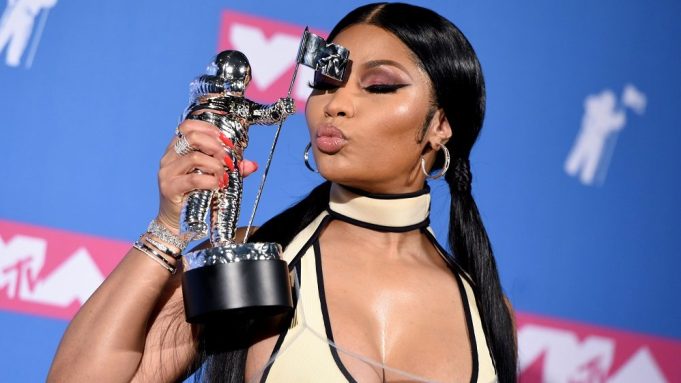 Radio City Music Hall was the place to be on Monday night as the 2018 edition of MTV Video Music Awards touched down. Among the big winners to be awarded onstage were Nicki Minaj, Post Malone (for Song of the Year for “Rockstar”) and Ariana Grande (Best Pop for “No Tears Left to Cry), but there was plenty of action off stage — and out of camera-shot.

Jennifer Lopez had a personal photographer in tow, boyfriend Alex Rodriguez. The retired New York Yankee whipped out his own iPhone to take pictures of his lady on the pink carpet. She then instructed him to get a shot of her shoes.

DJ Khaled arrived on the pink carpet with his permanent plus-one: son Asahd. Father and son shared a tender moment as the Hitmaker gave his “executive producer” a kiss.

Nicki Minaj makes her entrance with four bodyguards in tow, she crosses in front of the stage to get to her seat during Shawn Mendes’ performance.

Don’t shade on Fifth Harmony, said the collective crowd at Radio City, many of whom reacted with shock when Tiffany Haddish took a jab at the girl group that spawned Camila Cabello.

Pete Davidson and Ariana Grande only have eyes for each other, sharing several cutesy moments in the audience and chatting amongst themselves.

Camila Cabello sings along to every word of Bazzi’s performance of “Beautiful,” a song on which she is featured though it’s unclear why she didn’t join him on stage. The two are tight as Bazzi opened for Cabello’s “Never Be the Same” tour.

A half-hour into the show and the lobby to Radio City suddenly empties and Logic appears. The rapper delivers the start to “One Day” and is immediately surrounded by his fellow critics of President Trump’s immigration policy. After the performance, several of the people who marched behind Logic corralled in the lobby afterward, one holding a Mexican flag.

Jessie Reyez has a last-minute teeth check before she goes onstage to sing her song “Gatekeeper.”

After Nicki Minaj wins Best Hip-Hop for “Chun-Li”out (yes, she did say c—sucker on TV, but it was bleeped), she heads to the press room where she kisses her moon man.

Demi Lovato received a rousing cheer when her name was read out loud. Nominated for her song “Sorry Not Sorry,” the singer is currently in rehab following a drug overdose.

Amber Rose, who described her fire engine-red one-piece as “intergalactic space slut” and gave credit to Madonna for bust inspiration, parades through the lobby complete with S&M-appropriate whip and mask.

Post Malone celebrates his VMA win with a beer in the photo room. He then shared a moment with The Backstreet Boys, who congratulated Post on his moon man trophy.

Noah Cyrus and Lil Xan roll through the lobby with their crew during a commercial break, followed by a cloud of marijuana smoke.

Frankie Grande — and all his sequins — dances as J Balvin wins for Best Latin. Grande, who was sitting next to his sister, Ariana, and future brother-in-law Pete Davidson, is the only person standing in the celeb-filled section and was dancing his heart out to the winning song “Mi Gente.”

While Liam Payne presented on the main stage, Hayley Kiyoko is seen jumping up and down on her platform stage to warm up ahead of her performance.

Ariana Grande’s mother, grandmother and cousin rush out of the venue after her performance of “God Is a Woman” to get to Irving Plaza for her post-VMAs show.

DJ Khaled’s infant son, Asahd, might be the most popular person in the room as everyone hounds his parents for permission to selfie.

Pete Davidson and Frankie Grande are the first two to stand as soon as Ariana Grande’s name was called for her performance. The second her performance wrapped, the two leave the audience promptly with her manager Scooter Braun.

Jennifer Lopez’s daughter gives her mom a huge hug when she returns to her seat following her Video Vanguard performance.

Karlie Kloss is introduced to Jennifer Lopez during a commercial break.

Throughout the entire show, the Radio City lobby is loaded with cast members from MTV shows like “Jersey Shore” and “The Hills” trying desperately to make a spectacle of themselves.

Kylie Jenner stands front and center for her beau Travis Scott’s performance, donning her new platinum blonde hair, which she debuted at her 21st birthday. After his performance, she takes selfies with fans and makes a quick exit.

Madonna puts her arm around Camila Cabello as the two walk off stage following Cabello’s “Video of the Year” win.