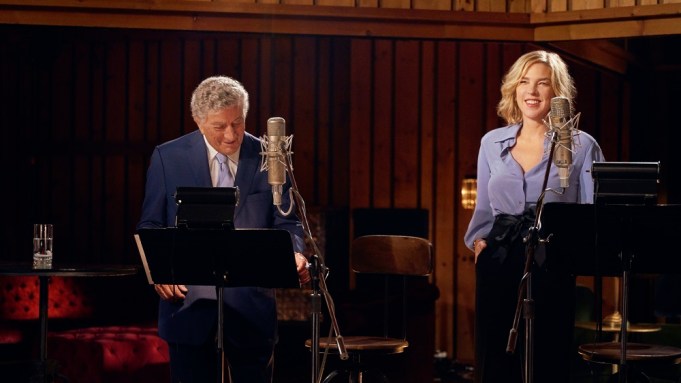 “So darn persistent” — that’s a phrase that George and Ira Gershwin came up with to describe “Fascinating Rhythm,” and it also applies to the endurance and willpower of Tony Bennett, who turns 92 on Friday. “Fascinating Rhythm” was the first recording Bennett ever made back in 1949, and after a few subsequent stabs at it in the intervening decades, he returns to that touchstone in a brand new duet with Diana Krall. Variety has the track’s exclusive premiere.

The unveiling of the recording precedes the unveiling of an entire joint album by Bennett and Krall, “Love is Here to Stay,” set to be officially announced on Bennett’s birthday. Variety can reveal the track listing for their first-ever full-length project together, which consists of 12 classic Gershwin compositions. The album, due September 14 on Verve/Columbia, includes a good number of songs one or the other or both of the duo have recorded on their own before — among them, “S’Wonderful,” “They Can’t Take That Away From Me,” “I Got Rhythm,” and “Do It Again” — plus a couple that neither have previously tackled: “My One and Only” and (a surprising omission in their careers, to date) “I’ve Got a Crush on You.”

Bennett has been on a duet-happy streak late in his career. In 2014, he had a No. 1 album with “Cheek to Cheek,” his album-length hookup with Lady Gaga, which spawned a successful tour. He has also released a series of all-star duets album in recent years, including 2006’s “Duets: An American Classic,” which paired him with both Krall and her husband Elvis Costello, as well as everyone from the Dixie Chicks to Bono. “Duets II” arrived in 2011 — with a much-ballyhooed Amy Winehouse duet, which turned out to be her final recording — and debuted at No 1. The following year, he released “Viva Duets” with a bevy of Latin American singers. In 2016, he released “Tony Bennett Celebrates 90,” a mostly-duets project that had Krall again among the guest stars.

Bennett is the record holder for the oldest artist to top the Billboard 200 sales chart, something he accomplished at 88 with the Lady Gaga collaboration, after having previously broken the record three years earlier. He has the potential to break his own record as the eldest No. 1 artist again, now at 92 (although he faces some stiff competition on the Sept. 14 release date from Carrie Underwood).

If anything, it’s surprising that Bennett and Krall, 53, didn’t do a full album together sooner, being musical soulmates despite their 40-year generation gap, and friends for at least two decades. On top of their several previous recorded one-offs, Krall and Bennett embarked on a joint tour in 2000 that she has described as “one of the highlights of my life.” In a promotional video for the new album, she can be seen gently teasing him with a classic come-on almost as old as the Gershwin standards: “You know how to whistle, don’t you, Tony?”

Interestingly, the track listing for the new album lists two solo numbers: “But Not for Me,” sung solely by Krall, and “Who Cares?,” a Bennett-only track. These are the only two lonesome and forlorn tunes on the album, and while that might not stop less lyric-sensitive duet partners, Krall and Bennett evidently figured that it might not make sense to pair up for songs about being alone.

The new recording of “Fascinating Rhythm” takes place at breakneck speed that belies Bennett’s ability to keep up with the younger singer. The first time he recorded the Gershwins’ tune — first sung by Fred and Adele Astaire in the 1924 Broadway musical “Lady Be Good” — Bennett was 23 years old and going under the stage name Joe Bari and recording for the little-known Leslie Records label. He was a star by the time he returned to it in 1959 in a recorded collaboration with Count Basie. He subsequently sang it on a 1962 live album from Carnegie Hall and with Buddy Rich on a 1982 TV special. Most of the other Gershwin compositions on “Love is Here to Stay” are better known in the 21st century, but there’s something almost comically rich about Bennett, at 92, paying homage to a breakneck rhythm that makes “the neighbors want to know why I’m always shaking” and “all a quiver.” He’s got the beat.