A multi-hyphenate and local hero, the Doggfather gets his due with a star on the Hollywood Walk of Fame. 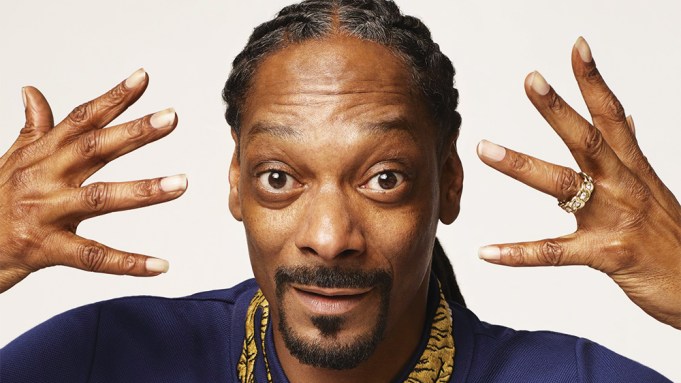 There is no Snoop Dogg museum in Los Angeles County. A grave omission. If a proposition to build one were put on the ballot, local registered voters would inevitably approve it in a landslide. But until that happens, the next best thing is an anonymous brick compound in Inglewood that serves as Snoop Dogg’s own Paisley Park.

That was then and this was now. Marijuana is now legal in California and Snoop went from America’s Most Wanted to American Idol (literally) to Hollywood Walk of Famer, when he receives the 2,651st star outside the El Capitan theater on Nov. 19. Walking into the compound, you glimpse a framed and signed photo of Snoop meeting the Obamas in the Oval Office. In another glass case, a poster advertises his Emmy-nominated VH1 show with white lace-lifestyle mogul, Martha Stewart. Jay Gatz wished he could’ve reinvented himself as artfully as Calvin Broadus — a reality that “the Simpsons”acknowledged when they conscripted him to voice himself on the episode, “The Great Phatsby.”

At 47-years-old, Mr. Murder Was the Case now reigns over a flourishing branded empire of cannabis-related businesses, commands the unconditional love of both you and your grandmother, still has a song in regular terrestrial radio rotation (“Smile Bitch”), and is about to receive that ultimate flex of “You Made It” celebrity, a star on the Hollywood Walk of Fame. Oh, and he’s still controversial enough to be on the receiving end of attacks from the President.

“You gotta’ put that work in,” Snoop explains, puffing on a blunt in the Mothership, the largest studio in the complex — full of black lights, burning candles, and flat-screen TVS. Atop the recording console, a 16-camera security panopticon monitors everyone coming and going. A bong is tucked inconspicuously underneath an end table covered with roses.

“It’s not like they just gave this to me,” Snoop continues. “The [press] was out to get me. I had to prove them wrong and do all the right things to get myself in favor. When you mess up, you look for redemption and when you do something wrong, you try to get it right. That’s where I am right now.”

Redemption is an allusion to Redemption of a Dogg, the semi-autobiographical touring musical that has absorbed much of Snoop’s early fall schedule. It’s one of roughly 74 projects that Snoop has going on at all times, including his new cookbook (“From Crook to Cook: Platinum Recipes From Tha Boss Dogg’s Kitchen”), his GGN news show (coming soon in adapted form to film and television) and a game show (“Snoop Dogg Presents The Joker’s Wild,” returning to TBS next year). His most recent album, “Snoop Dogg Presents Bible of Love” topped the gospel charts in March, and he hints that it’s about to nominated for a Grammy.

How did we get here? The first answer is that Snoop Dogg is sui generis, the American Dream writ weird, an icon in a stoned outlaw lineage that includes Willie Nelson, Keith Richards, George Clinton, and Lee Perry. There are some artists who spawn entire schools of imitators, but Snoop cannot be mimicked. We often conflate genius with eccentricity — as though the nakedly transgressive is the most obvious sign of brilliance. But Snoop is a genius of a different sort, improvisational and lightning-swift in response, capable of revealing additional layers of complexity without reinventing himself (Snoop Lion aside). Other than Sinatra, arguably no one in pop culture history has been relevant longer.

In person, he can only be described as being like Snoop, which is to say timeless — the effortless personification of cool. He remains skinny as a spliff, clad in a navy blue and red Adidas tracksuit and slippers. His braids are covered by a white hat with a weed leaf on it like he just stepped out of the “Nuthin’ But a G Thang” video. That’s where the world first discovered the Eastside Long Beach native, who had spent his late teens in and out of jail before his childhood friend and rap partner, Warren G brought him to his half-brother, Dr. Dre. From there, perfection was perfected.

“Dre taught me so much, but I learned so much from having DOC as my sensei. He really showed me how to write,” Snoop says, abandoning the blunt halfway. “The last time I went to Dallas, he came to my performance and hugged me after the show and said ‘I’m so proud of you cuz.’ That’s the ultimate feeling: when your coach can be impressed that you became a great player and it’s all because of him.”

If the most superficially visible side of Snoop is the hilarious smoked-out uncle, more nuanced strata exist underneath. In conversation, he’s a serious music historian, quick to pay reverence to his peers and spiritual ancestors. He’s still in slight awe of being friends with George Clinton, still proud that when they first met decades ago, Clinton called him the “pick of the litter.”

“When I met [Clinton], I said, ‘you didn’t know but on your song ‘Atomic Dog,’ you shouted me out and I wasn’t even in the game,” Snoop laughs. “He was like what are you talking about? I was like you said, ‘futuristic bow wow.’ That’s me. I’m the big bow wow and I’m from the future.”

There are too many stories with Snoop; it’s impossible to even know where to begin. He talks about how Suge Knight befriended Warren Beatty and regularly brought him to Death Row. He and 2Pac hit it off, and that’s how the late Makaveli got into Versace. It was also2Pac who first encouraged Snoop to think beyond music.

“2Pac was all about being in movies and a part of movies. I liked movies. He gave me the bug,” Snoop recalls.

Then he acts out an old exchange between him and Pac.

“Nah, you tripping. I ain’t no motherf—-ing actor.”

Snoop continues: “That’s the kind of person he was. He’d push s–t on you if he knew was great — if he knew you could do better.”

After 2Pac’s murder and Death Row’s subsequent decline, the prescient Snoop switched to Master P’s No Limit Records. At the time, controversy surrounded the notion of a definitive West Coast artist signing with the biggest label in the-then fledgling South. In hindsight, he intuitively grasped that the region would become hip-hop’s biggest over the next two decades.

Snoop’s third career phase began in the early years of this millennium. If he spent his first musical decade within the confines of Death Row and No Limit expectations, he was suddenly free to experiment and expand the boundaries of what being Snoop Dogg meant.

“It’s always been there but I never had the room to do it,” he says. “On Death Row Records, they just wanted me to be all about Death Row Records. There were so many artists on No Limit records that you couldn’t focus on no one but No Limit records, because they were all family and that’s what made sense. When I got my hands free, I could work with whoever I wanted to, based on me having a relationship with them.”

But throughout this unprecedented run, Snoop displayed a creative fearlessness that belies conventional logic. When he released 2007’s “Sensual Seduction,” the retro-erotic ballad, it ostensibly seemed that his synapses had short-circuited. In reality, it became a classic first-wave auto-tune anthem that cracked the Billboard Top 10. During the late years of the last decade, his touring band offered crucial early opportunities to current jazz visionaries, Kamasi Washington and Thundercat.

While some critics maligned his Snoop Lion album, it’s actually little different than deified French crooner Serge Gainsbourg sojourning to Jamaica to create his own reggae lilt in the late 70s. And in 2013, Snoop teamed with Dam-Funk for “7 Days of Funk,” which found him assuming his final form as cold-blooded funk pharaoh.

“Snoop is a true music historian,” Dam-Funk says. “From Blue Magic to Willie Nelson to Kashif to Garry Numan, he loves and knows it all. He’s really a post-funk artist who kept the music alive when labels stopped signing funk musicians. He’s a genius who doesn’t often get credited as one — one who stayed relevant through each era and stayed true to the fabric of West Coast music and style.”

If the route to mainstream American acceptance usually involves rappers eventually morphing into safe family-friendly artists, Snoop refused to saw off his gangsta rap roots. He’s been a vocal critic of President Trump, even shooting a clown dressed as him in a 2017 video. Earlier this year, he called Kanye West an “Uncle Tom” for supporting the chief executive.

“I speak when I need to. When the voiceless don’t have a platform to speak, I feel like that’s my time,” Snoop says. “I don’t be speaking just to be speaking, something has to drive me to speak. So it has to be something that I’m passionate about…something I need to say right now for the people sitting at home… I know y’all wanna’ say it but you can’t…so here, take it.”

“Snoop is a true music historian. From Blue Magic to Willie Nelson to Kashif to Gary Numan, he loves and knows it all.”
Dam-Funk

His early controversies might have once scared away business partnerships, but as the generation that Snoop irrevocably shaped, continues to get into positions of power, his financial clout has only grown. With his longtime business partner and manager Ted Chung, Snoop created Casa Verde Capital, a venture stage investment firm that has raised $50 million to fund companies in the greater cannabis sphere. Most prominently, the company helped finance Eaze, the so-called “Uber of Weed” and Tiger Global, a company that tracks and traces cannabis plants across supply chains. There’s also the Casa Verde-owned, Merry Jane, a website, production company, and creative agency. Not to ignore LBS (Leased by Snoop), a booming marijuana products company that sells everything from flower to extracts to CBD oil.

“Snoop knows what’s happening a few steps before it manifests,” Chung explains his partner’s entrepreneurial acumen. “He’s a captain of culture, who is just enough ahead of the curve that by the time things come to fruition, there’s always a lot of success.”

Back in Inglewood, Snoop once again sparks up the half-smoked blunt. This is seemingly the cue that time is running short. The conversation naturally slants towards the bigger picture, the wisdom accrued over nearly a half century of earth, much of that time spent as one of the famous humans to inhale and exhale.

“You only die once, so you should live every day,” Snoop intones like a comic Buddha. “Rule No. 2, master your self –master being great at you, because once you understand the mechanisms of you, you control you at all times. That way, you’ll never be out of control.”

He stands up; towering like a telephone pole, forever slim with the tilted brim. In a world of chaos, he remains forever unchangeable — the comforting, avuncular legend. With a giant drag of the blunt, he glides out of the room, quickly disappearing into another darkly lit studio, to thankfully keep being Snoop Dogg eternally.