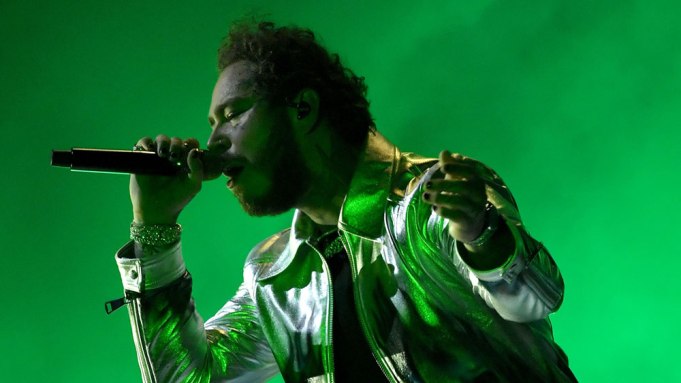 Post Malone and Swae Lee dropped a new song on Thursday called “Sunflower,” which apparently includes in its title the name of the forthcoming film soundtrack from which it comes (the song’s full title is “Sunflower (Spider-Man: Into the Spider-Verse)”). The single re-teams Post and Swae after the two joined forces for “Spoil My Night” from Post’s album “beerbongs & Bentleys.”

Sony Pictures Entertainment and Republic Records have teamed up for the first time to create a “contemporary musical companion” for the upcoming feature film, according to the announcement. “The two camps worked closely to create a soundtrack in support of the multicultural protagonist of the film, Miles Morales,” it continues. “The music from the soundtrack will span multiple genres including Hip Hop, Latin and Pop and look to portray what a teen like Miles is listening to across the country.”

“Post and Swae have delivered a song that’s both heroic and emotional, which is exactly what a Spider-Man story needs. It’s anthemic, but also heartfelt — the perfect soundtrack for Miles to discover the Spider-Man inside himself,” said Spring Aspers, Head of Music, Creative Affairs Worldwide for Sony Pictures Entertainment’s Motion Picture Group.

In other Post news, last week sources said that the rapper will not be a nominee for best new artist at the 2019 Grammy Awards. Many Grammy categories, including best new artist, are determined by screening committees, consisting primarily of executives and producers, which meet and discuss candidates. Sources tell Variety that in recent screening meetings, it was decided — over some strenuous objections — that Post is basically too successful to be considered for the category. The key phrase in the rules is whether an artist “came into prominence” or “achieved a breakthrough into the public consciousness and impacted the musical landscape” before the year’s window of eligibility, and the committee decided that Post had.

“‘Breakthrough’ is in the eye of the beholder,” a source close to the situation opined to Variety, noting that many of the committee’s members have “skin in the game,” although they are expected to be non-partisan. “Apparently, he’s too big.”