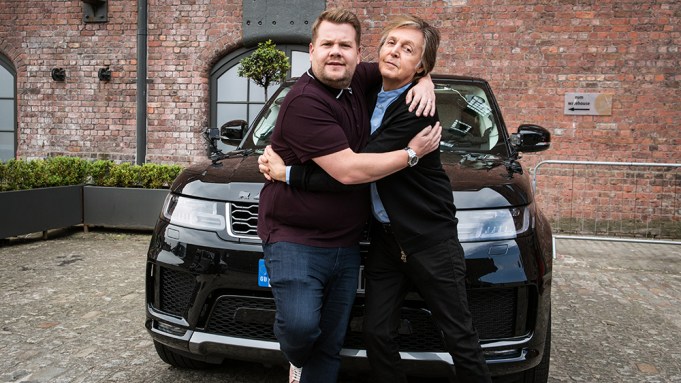 After encountering McCartney and Corden on what started off as just a regular workday, Liverpool Beatles tour guide Jackie Spencer told Variety how McCartney was “being really nice to everybody. He was backing people in so they could get pictures with him. He and James Corden were taking selfies. And they just walked back, got in the car and disappeared off and went ’round Liverpool. It was fabulous.”

The first look video kicks off with Corden reciting the lyrics to Beatles hit “Help!” in a deadpan manner, insisting that he “needs somebody, not just anybody.” He adds: “Can you please, please help me?”

McCartney then appears, driving the vehicle as he and Corden sing along to “Drive My Car.” The 18-time Grammy Award-winner proceeds to speed up on the drive as they sing “Yes, I’m gonna be a star / Baby, you can drive my car / And maybe I’ll love you.”

The video is then spliced together to see Corden and McCartney switch seats back and forth in time to the song’s “beep beep” section.

Along with McCartney, the lineup for Corden’s return to London this week is set to feature Chris Pratt, Damian Lewis, J.J. Abrams, and Ruth Wilson. Previously announced guests include Cher, Cate Blanchett, Orlando Bloom, Niall Horan, and the Foo Fighters.