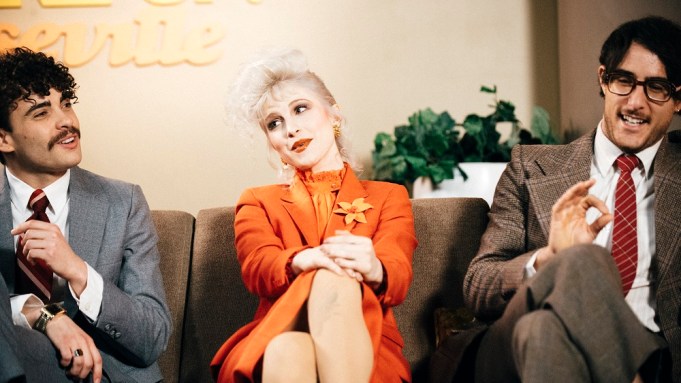 You could say the members of Paramore have new day jobs — as morning talk show hosts.

In a music video released on Monday for new single “Rose-Colored Boy,” the band members star as hosts of “Wake Up, Roseville!” with frontwoman Hayley Williams playing lead anchor. The spoof cycles through a number of classic morning guests, including a weather-predicting dog, a happiness guru and a dessert chef, as the song plays. When the newscast ends, Williams is repeatedly scolded by the show’s executives for not smiling enough and not creating a happy vibe for the audience.

At her breaking point, Williams runs off the set and encounters a young version of herself who dreamed of being a journalist, with the young girl asking, “Hayley, what are you doing? This isn’t you.” The Paramore singer returns to the show’s set to trash it and perform her single, singing on the desk while her band surrounds her.

The video directed by Warren Fu (The Weeknd, Haim) drops as the band’s new world tour, “Tour Four,”  kicks off this week in Australia. Paramore will also perform at Bonnaroo Music Festival for the first time in June.

“Rose-Colored Boy” is off of Paramore’s fifth album “After Laughter,” which was released in May 2017, and also included single “Hard Times,” “Told You So” and “Fake Happy.”