In honoring of the group’s permanent place in music history, we look back at six defining moments of *NSYNC’s short but impactful career. 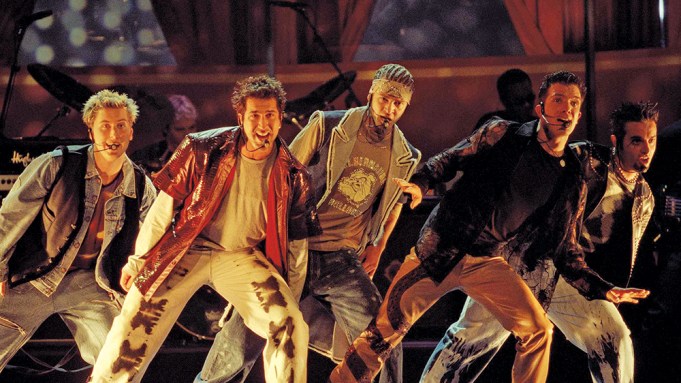 By the turn of the millennium, the members of boy band *NSYNC — Justin Timberlake, Lance Bass, JC Chasez, Joey Fatone, and Chris Kirkpatrick – were massive stars, so it’s no surprise that, on the anniversary year of the group’s first album, they would be recognized with their own everlasting star on the Hollywood Walk of Fame. It’s even more fitting that the ceremony is taking place on April 30, because, cracks Fatone: “It’s gonna be May!”

That’s right, you know you’ve made it when a song released nearly two decades ago – “It’s Gonna Be Me” —  finds new life each year as a popular meme. But *NSYNC was no ordinary group, which is why demand for a reunion persists. For now, though, fans will have to be satisfied with the rare appearance of all five members at 7080 Hollywood Blvd. “It will be a special moment,” says Bass. “Everyone we’ve worked with — every choreographer, every record person, our families, our friends and our fans —  that star ceremony is honoring.”

“It’s something you dream about, adds Fatone, a sentiment shared by Kirkpatrick, who tells Variety, “This is iconic.”

In honoring of the group’s permanent place in music history, we look back at six defining moments of *NSYNC’s short but impactful career.

In the mid-1990s, boy bands were out of fashion in the U.S., where radio was still living in a post-grunge haze. So the decision was made to break Europe first. The strategy worked. “I felt like we were an overnight sensation,” says Bass. “We were on the cover of every magazine before we even released a song, which was strange. They’re all about boy bands over there.”

Another prescient move was aligning the group musically with Swedish producer Max Martin, who had yet to see his first hit (but has since written more than 20 U.S. No. 1s). “We had never been able to get to that caliber of producer,” recalls Bass. It’s a relationship that paid off in dividends, leading to six chart-topping hits for the group, including “It’s Gonna Be Me,” “Tearin’ Up My Heart” and “I Want You Back.” And even as recently as 2016, Timberlake teamed with Max Martin for the smash, “Can’t Stop the Feeling!”

You could say *NSYNC was ahead of its time when it came to styles in hair and fashion. Or maybe the trends took a detour during those years. Says Kirkpatrick of their chosen hair styles: “Ramen noodles. … I think one time JC had a Caesar Frankenstein haircut.” Chasez defends the choices. “At the time, we were like, ‘Dude, that’s so rad!,’” he says. “We would call Chris the pineapple. Now he’s thinking, ‘Why did I do that to my head?’ Joey had bright, bright fire engine-red hair and it was fun for a while.” Adds Bass: “We had the frosted tips, the curls, the dreads … We’ve had it all!”

*NSYNC’s outfits for performances and appearances also feel a bit off in retrospect. “I don’t think anybody loves everything they ever wore to school or to college or even 10 years ago,” Chasez defends. “As trends change, your tastes change. .. I mean, we wore every kind of rhinestone on the face of the earth.”

Bass says budgets limited what they were able to wear. “We had zero money for anything, especially outfits,” he recalls. “We would just kind of stitch things together.”

In the early years, “We were essentially wearing Velcro onesies and white motorcycle helmets,” adds Chasez. “But at the time, you’re, like, ‘We’re going to have these slick white outfits and look like robots — like we came out of outer space.”

When 2000’s “No Strings Attached” sold 2.4 Million albums in its first week out – a record until Adele broke it with “25” in 2015, it was “one of the highlights of our career, for sure,” says Bass. “We had no idea that that album would sell like that. We were scared for so many reasons.” At the time, the group was involved in a contentious lawsuit with former manager Lou Pearlman, and Bass says they feared “that no one cared about us anymore — out of sight, out of mind – and that the lawsuit would take us out of commission for a very long time.” The experience inspired the hit album’s title:  “We had no strings on us anymore. … It showed people how we felt with a record label that was holding us back. And the fans loved the story behind it. Because it really came from the heart.”

“You’re terrified, but you’re also standing up for what you believe in,” adds Chasez. “You’re trying to do what you honestly believe is right. But in the middle of that, the fear is always there. You’re like, ‘Is this the end?’ You don’t know. You can only hope that it goes your way because you believe in what you’re doing. So it was terrifying … and exhausting and exciting all at the same time.”

“It was terrifying … and exhausting and exciting, all at the same time.”
JC Chasez

But in the end, the success of “No Strings Attached,” says Fatone, “was so surreal.” He recalls: “We were in New York City doing some press and were, like, ‘Let’s drive down to the Virgin Megastore in Times Square because at midnight our album goes on sale. So we drive by and this line that goes all the way down the avenue, around the block, then around the other block almost [encircling] the store. It was unbelievable.”

“When you do the moves ‘bye, bye, bye’ with your hands, that doesn’t mean, ‘bye, bye, bye,’ at all. The hand is to say, stop speaking. Like, shut up.” The now iconic choreography for the 2000 video was a game-changer for the group. “It was one of those things where we never knew it would some sort of an iconic dance per se,” says Fatone. “People know that one move…. The chomp, chomp, chomp, like Pacman or something.”

During an era when MTV’s “TRL” ruled music fans’ lives, *NSYNC were major drivers of the popularity of dance. Choreography was something they focused on from the start, but as the group sold more albums, budgets for music videos also grew. A pinnacle for the group was the “Bye Bye Bye” clip which featured intricate production in creating puppet figures out of all five members. “We had to be in the makeup so long and you’re sweating out the glue and it’s coming out,” says Chasez. “You basically have this kind of weird black liquid coming out of your forehead while doing all your choreography and you’re thinking to yourself that can’t be good.”

Adds Fatone: “Shooting that was a little grueling. We literally had the makeup on starting at 7 a.m. and didn’t take it off until 7 a.m. the next day. Fun, but brutal.”

“That definitely removed a few layers of skin,” says Bass with a laugh.

The elaborate production of today’s stadium concerts headlined by pop acts has its roots in *NSYNC’s hugely successful 2001 run, the PopOdyssey tour. “We started to do different things, like [hang] up against a wall of Velcro; we had conveyor belts that went across the stage during ‘See Right Through You;’ for ‘Space Cowboy’ we came across on a wire but then also danced on these big mechanical bulls that we spent a crap load of money on that only lasted for one show. We wanted to make sure the creativity was always there and that we did things that were fun for us.”

By the time PopOdyssey came around, *NSYNC was also savvy enough to document their every move. “We did an MTV [series], ‘Making the Tour’ on top of really making the tour,” says Bass. “We only had about two or three weeks to build the production and learn all the choreography, but I was so glad we got to document all of it.”

Adds Kirkpatrick: “Touring was huge to us because that’s when you’re with the people who love your music. It’s hard to even call them fans because they were like friends.”

“We were trying to keep it as much of a secret as we could,” says Fatone of the group’s one-night-only reunion on the 2013 VMAs. “Joey’s really bad at keeping quiet,” laughs Kirkpatrick, who adds that the guys gathered to honor Timberlake, who was receiving the Michael Jackson Video Vanguard award. “He asked us to come and perform with him, because we were such a big part of his career.” Adds Chasez: “We wanted to be supportive of him.”

The five-song medley nearly broke the internet. “It was interesting to see the reaction — almost like we died and came back to life,” says Fatone. “We saw Taylor Swift and Lady Gaga [in the audience] losing their minds remembering when they were teenagers watching us. To watch them do that when they were at the height of their career was hilarious. It makes you feel good and weird.”

Adds Bass: “It was just a great reunion. We had such a fun two days of rehearsing, and being stupid, and acting like we’re teenagers again.”