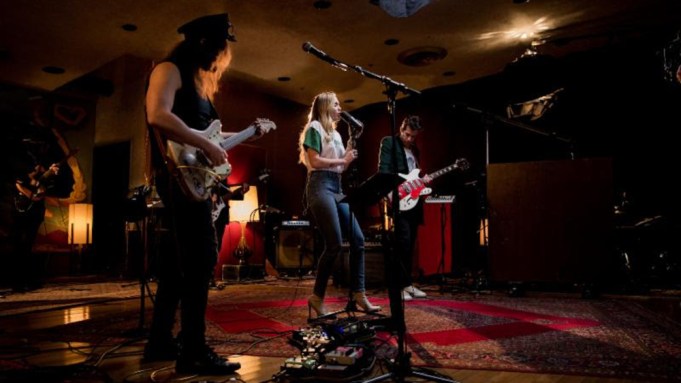 Vevo has released a special performance of Miley Cyrus and Mark Ronson’s cover of “Happy Xmas (War Is Over),” featuring Sean Ono Lennon (watch the video above). The holiday classic was originally released by Sean’s parents, John Lennon and Yoko Ono, in 1971.

The three came together at the historic Electric Ladyland recording studio in Greenwich Village, New York City, which was the longtime music home of Jimi Hendrix, to record a live performance of the song. Their cover was released Dec. 14. and all three artists performed it live on “Saturday Night Live” the next night, where Cyrus and Ronson also performed their new song, “Nothing Breaks Like a Heart.” A portion of the artist proceeds will go to Spirit Foundations, Yoko Ono’s charity that she started with John Lennon.

Lennon and Ono conceived the song as both a holiday tune and a protest piece against the Vietnam War. The original music video featured images of Lennon and Ono, as well as Sean, and vocals from the Harlem Community Choir and a boys’ choral ensemble.

The song has been covered numerous times by artists such as Sarah McLachlan, the Fray, Diana Ross, and Carly Simon. During the John Lennon 75th Birthday Concert, Sheryl Crow, Aloe Blacc, and Peter Frampton delivered a rendition featuring a children’s chorus from The Stuttering Association for the Youth.