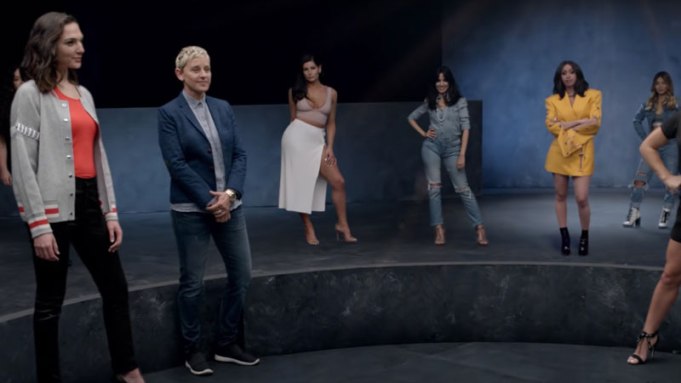 In Maroon 5’s latest music video, frontman Adam Levine declares he “needs a girl like you,” while aiming his affections at some of Hollywood’s A-list women.

For the band’s latest single, “Girls Like You” featuring Cardi B, Levine performs the song while the camera circles around him, revealing a long line of female stars standing by his side. Gal Gadot, Ellen DeGeneres, Jennifer Lopez, Camila Cabello, Aly Raisman, Sarah Silverman, Tiffany Haddish, Rita Ora, Millie Bobby Brown, Mary J. Blige, Elizabeth Banks, and Ashley Graham are among the dozens of the famous women featured in the video, singing and dancing along to the song.

Some of the women wear statement T-shirts, including Raisman, who poses to reveal a tee that says “Always speak your truth,” while Levine holds her hand. The Olympic gymnast became an outspoken member of the #MeToo movement when she testified against former USA Gymnastics doctor Larry Nassar at his sentencing on charges of criminal sexual conduct.

Cardi B also gets a solo performance in the video, rapping alone in the room in a bright yellow ensemble. At the end of the clip, Levine embraces his wife Behati Prinsloo and daughter Dusty Rose, and the camera pans out to show all of the women featured in the video standing together in a circle.

“Girls Like You” is the third single off of Maroon 5’s “Red Pill Blues” album, which the band released in November.