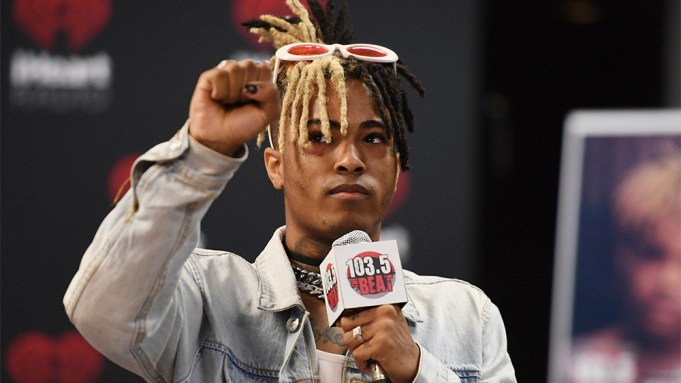 Hundreds of fans gathered Tuesday night in the Fairfax district of Los Angeles to remember slain rapper XXXTentacion, who was shot dead in Florida Monday.

According to the Los Angeles Times, between 300 and 500 people thronged Melrose Avenue near Spaulding, blocking traffic. Some climbed onto rooftops, and at one point, a mosh pit formed in the middle of the crowd. Some attendees also formed a candlelight vigil in the middle of a road.

Police became involved around 7:20 p.m., and several police cruisers blocked the intersections around the protesters. Shortly before 9 p.m., more police officers were en route to disperse the crowd.

According to Hollywood Scanner, the crowd became “increasingly aggressive,” including jumping on the hood of a news van, swarming vehicles, and throwing things at police. An on-site LAPD helicopter advised that there were 1,000 people in the area and sent out dispersal orders.

Also on Tuesday, XXX’s alleged abuse victim said she was “broken” by his death in a tweet. “It’s disgusting that people are speaking for me,” Geneva Ayala wrote. “I don’t care if no one cared about me however many months ago, I didn’t lose my life. He did. It’s permanent. I’m still here. Like how do you think that makes me feel? Everyone expecting me to be relieved or happy?! No, i’m broken.”

At least 300 people have amassed on Melrose Avenue, near Spaulding, to pay tribute to rapper XXXTentacion, who was fatally shot during a robbery in Florida yesterday pic.twitter.com/K8kmxFQVZl