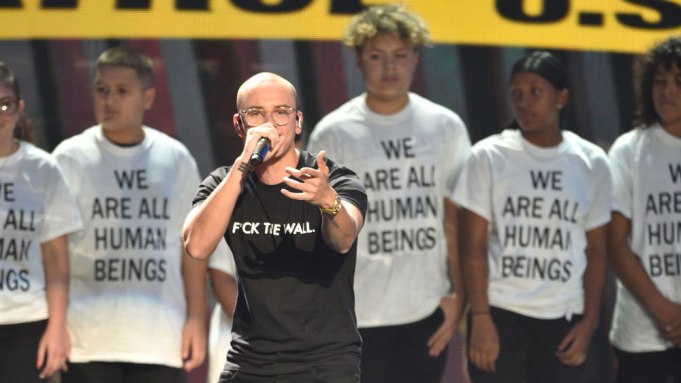 Logic delivered another powerful performance at the MTV Video Music Awards on Monday, using a backdrop of immigration illustrated by a U.S. Border Patrol graphic and a T-shirt that read “F— the Wall,” referencing President Donald Trump’s proposed border-crossing deterrent.

The immigration-themed set featured dozens of advocates for immigrants’ rights and others displaced by Trump’s policies at the border. Civil rights organizations have also fought to keep DACA, or Deferred Action for Childhood Arrivals, following Trump’s attempts to end the immigration policy. Former President Barack Obama created the program to protect young undocumented immigrants from deportation.

During his VMA performance of “One Day,” on which he was joined by OneRepublic’s Ryan Tedder, the rapper also showed his support for immigrants, by saying, “Bring us your tired, your poor, and any immigrant who seeks refuge. Together, we can build not just a better country, but a world that is destined to be united.”

At the 2018 Grammy Awards, Logic performed his song “1-800-273-8255” with Alessia Cara and Khalid, to encourage people struggling with mental health to call the number to the National Suicide Prevention Lifeline. Suicide attempt survivors joined the artists on stage, wearing T-shirts with the number and the message: “You are not alone.”

At last year’s VMAs, Logic also performed the song and spoke about using his platform to raise awareness for issues ranging from anxiety to sexual assault.

“I don’t give a damn if you’re black, white, or any color in between. I don’t care if you’re Christian, you’re Muslim, you’re gay, you’re straight,” Logic said. “I’m gonna fight for your equality because I believe that we are all born equal, but we are not treated equal and that is why we must fight.”