The Miami rapper broke out in 2017 with the hit "Gucci Gang." 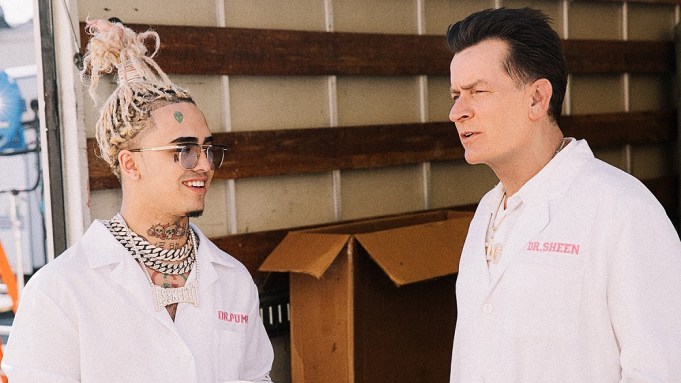 “I’ve been smoking since I was eleven / I’ve been popping pills since I was seven.” Those are just two of the many drug references that pepper the lyrics to Lil Pump’s latest, “Drug Addicts.” The rapper dropped the track and a video co-starring Charlie Sheen (watch it above), late on Thursday night (July 5).

In the clip, directed by Hannah Lux Davis, the 17-year-old plays alongside “Dr. Sheen.” The two are seen wheeling a drug cart through a psychedelic hospital ward where patients are gleefully smoking, drinking, dropping ecstasy and popping pills. Scantily-clad nurses join in on the shenanigans, riding alongside Pump in  golf cart and gathering for a dance party in an empty pool.

The Miami rapper broke out in 2017 with the hit “Gucci Gang,” which has logged more than 2 billion audio and video streams, and over 1 million equivalent album sales for Lil Pump’s self-titled debut released in October of that year. The song also inspired a hilarious send-up on “Saturday Night Live” starring Pete Davidson and Sam Rockwell paying homage to Stanley Tucci.

Signed to Tha Lights Global/Warner Bros. Records, Pump’s contract with the label came under scrutiny because it was signed when he was a minor and thus left him open to competing offers, a source close to the situation confirmed to Variety in March. Those offers were said to be as high as $8 million to $12 million and possibly higher, according to reports.

Sheen tweeted a photo of himself with Pump on the set of “Drug Addicts.” See it below.

what day
did you
want to
break
the internet?