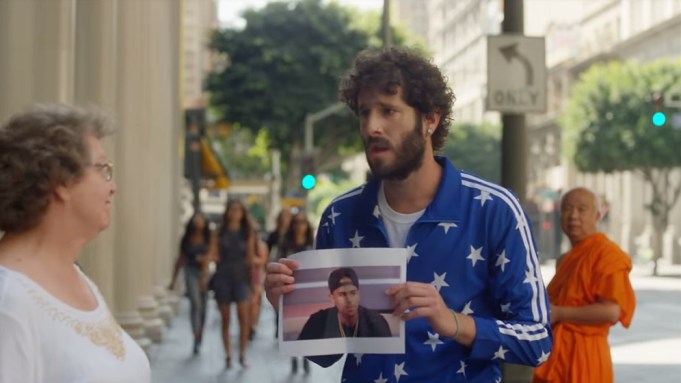 They say be careful what you wish for. Look no further than Lil Dicky’s new music video for proof. In “Freaky Friday” featuring Chris Brown, the rapper fully embraces his twist of fate as he wakes up in Brown’s body.

Fans of the 2003 “Freaky Friday” remake starring Lindsay Lohan and Jamie Lee Curtis will instantly recognize the rapper’s homage to the film from the opening scene at a Chinese restaurant to Chris Brown literally crooning: “Somehow this s–t turned into ‘Freaky Friday.'”

In an interview with iHeartRadio, Lil Dicky nodded to how he had seen the “childhood classic” movie and thought: “Wouldn’t it be interesting to switch bodies with somebody in music?” Chris Brown came to mind as the perfect juxtaposition.

In the slightly NSFW music video, both artists wish to become somebody else and only switch their bodies back when Chris Brown, in Lil Dicky’s body, reveals that he does love himself, which is “the key, now we’re switching back.”

Lil Dicky called having a choreographed dance scene with Chris Brown — after they return to their rightful bodies — a “bucket list thing to do” and thought he turned in a “solid” performance in the end, despite the mounted stress he felt to complete the video “in the best way possible.”

But the “Freaky Friday” cameos don’t end there. Other celebrities who pop up in the clip to switch bodies with Lil Dicky include Ed Sheeran, DJ Khaled, and Kendall Jenner, who, as Dicky in her body, marvels at having breasts.