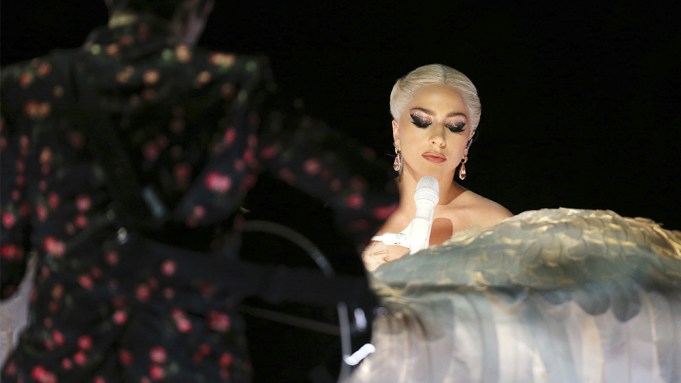 Lady Gaga was among the celebrities who wore white roses to the Grammys Sunday night, but she found another way to voice her support for the Time’s Up initiative and #MeToo movement.

During a lull partway through her performance of her Grammy-nominated single “Million Reasons,” she said “time’s up” into the mic.

See the moment below.

Gaga dedicated the performance to her father’s late sister Joanne, for whom her album is also named, and told the audience, “This is for love and compassion even when you can’t understand.” She ended her performance lying on her back on her piano, with massive feathery wings spread out behind her to emulate an angel.

Gaga has been nominated for a Grammy 19 times, and won six, the most recent being best traditional pop vocal album for “Cheek to Cheek,” her collaboration with Tony Bennett. She won three Grammys in 2010 for “The Fame Monster” and its hit single “Bad Romance,” which also took home an award for best music video. Gaga has long been supportive of victims of sexual assault and abuse, and contributed the song “Til It Happens to You” to “The Hunting Ground,” a documentary about college campus sexual assault. The song also received a Grammy nom in 2015.