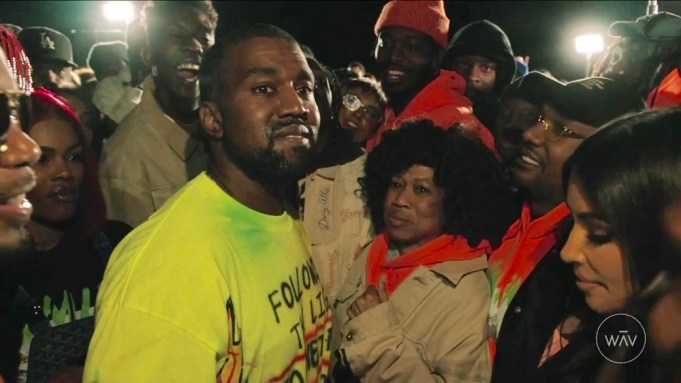 Kanye West has revealed the title to his ninth studio album, which will simply be called “YE.”

The announcement was made by comedian Chris Rock in Jackson Hole, Wyoming, where the rapper gathered along with key music journalists, influencers and music executives to hear the album.

“Hip hop music is the first art form created by free black men,” said Rock from a grassy field illuminated by camera lights and a bonfire. “And no black man has taken advantage of his freedom more than Kanye West. … Listen without prejudice. I can’t wait to watch you experience [it].”

The listening session kicked off promptly at 9 p.m. PST. West made his way through the crowd accompanied by wife Kim Kardashian West and adviser and former manager Scooter Braun.

West had the idea last Friday to fly a planeload of media, radio, DJs, and other influencers to a remote location to hear his new album. Def Jam staffers leaped into action and spent much of the weekend mobilizing and organizing people from both coasts as well as Europe, Australia, and Asia to make the trek.

It appears that, like the seven-track Pusha T album “Daytona,” which West produced, it’s a comparatively short collection, clocking in at less than 30 minutes.