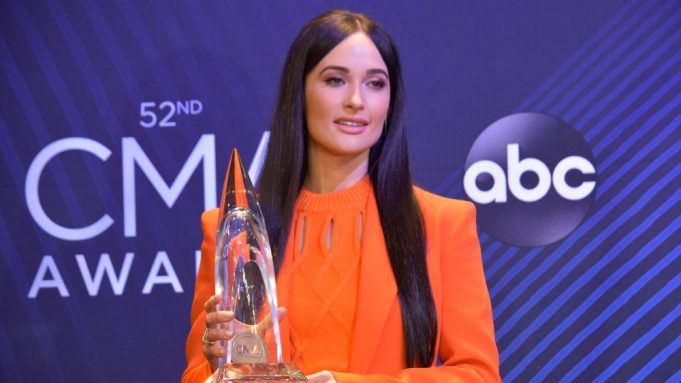 Kacey Musgaves’ nomination for “Golden Hour” in the Album of the Year category gives the singer one of 2018’s most buzzed-about nominations. With a total of four nominations, including Musgraves would seem to be the Queen of Country, as far as the Grammys are concerned. But is she a queen without a country?

As far as the mainstream media are concerned, there’s no bigger female country star right now than Musgraves, who continues to charm the confluence of critics and TV bookers necessary to make her country’s It Girl. That’s a position she’s held for five years, more or less, at this point, even though Grammy didn’t elevate her to one of the top all-genre spots until she made this more genre-defying album. Maren Morris has come along and threatened to usurp that position, and Miranda Lambert could always reclaim it, but when it comes to the media’s true sweetheart of the rodeo, Musgraves doesn’t really have much competition.

But has Musgraves really moved on from the rodeo? “Golden Hour” is the artist’s third album (not counting a holiday collection), but the first that her Nashville label didn’t even try to push to country radio. No doubt she and UMG Nashville came to some kind of agreement that there was no use putting out good money after bad. Her first single, 2012’s “Merry Go ‘Round,” was embraced by radio, to an extent, barely cracking the airplay top 10. Since then, though, their attitude has mostly been “We don’t get it,” with the two singles off her sophomore release, “Pageant Material,” not even making country’s top 40. When “Golden Hour” came out in March, two songs were simultaneously made available to radio — “Butterflies” and “Space Cowboy” — just in case anybody wanted to play ‘em. But, basically, Musgraves and country radio seemed to regard each other as amicable exes who don’t want to do anything to sully the memory of their brief fling, while they each go on to more fruitful relationships — country radio with every single male artist they can get their hands on, and Musgraves with every single critic and talent booker in the world.

There’s an additional, provocative question in the mix with “Golden Hour,” though: Is it even a country album? Musgraves has certainly not overtly taken the Taylor Swift “pick a lane” approach and declared that her lane is pop. But when the album came out, reviewers certainly noticed a dramatic shift in style, with not just a new set of producers but a new musical attitude. “Musgraves is pretty much reinventing her whole sound and lyrical approach with ‘Golden Hour,’” Variety wrote, saying she’d “ditched the kitschy throwback aspects of her look and the whimsicality of songs like ‘Biscuits’ and ‘Follow Your Arrow’ for a regionally unspecific record that might be more quickly identified as pop” — albeit “a distinctly chill, finger-picky brand of pop” that didn’t have mercenary designs on any particular radio format, least of all Top 40. “It feels like she’s making exactly the right move by painting herself out of a corner, as lovable as that corner was,” Variety concluded. “Maybe she’ll get back someday to her vintage Loretta Lynn fetish, but damn if she isn’t just as appealing as a folky Sade.” (Rolling Stone agreed: “Though ‘Golden Hour’ might take time to relax into, the set is a fine lava-lamp soundtrack, and if ‘country’ suggests engaging American musical traditions with respect and pioneer spirit, then this album is as country as it comes.”)

It seemed like “Golden Hour” was the kind of album that could easily get lost, with no radio format to appeal to and a distinctive, evolved style that was hard even for critics to nail down. And yet, at least in the cultural conversation, it became maybe her best-loved album yet. It’s unabashedly romantic, reflecting the happy afterglow of her recent marriage, and unabashedly mellow and a little trippy, reflecting a love for pot that comes up immediately in the album’s first song, “Slow Burn.” She and her Nashville-based but non-country co-producers, Daniel Tashian and Ian Fitchuk, used a lot of electronics and acoustic guitar and subliminal amounts of banjo to arrive at something that still had its roots in roots music, but which would qualify as a “country album” only to someone with a very loose sense of boundaries.

And maybe we all have a loose sense of boundaries in this Spotify age, because most people seem perfectly fine with calling it country after all. In November the Country Music Association gave “Golden Hour” their Album of the Year prize, and if the freaking CMA considers it country, who are the rest of us to say, “Hey, you’re being a little bit liberal with that definition”? It’s not as if country radio suddenly starting programming “Golden Hour” tracks as a result of the honor; the Album of the Year CMA often tends to be a token “cred” honor that the org gives to a truly artistic album that didn’t go like gangbusters in the marketplace and makes radio people think the voters are out of touch with what’s really happening. But however you look at it, that was a remarkable achievement for Musgraves — that in shaking off her genre chains, some, she got what some would consider to be the genre’s highest honor.

In the press room at the CMAs last month, I couldn’t help but pick up on some of the things that make Musgraves personally stand out in the country world. Part of the process after winning an award involves going back and posing with the trophy for photographers for a couple of minutes, putting on the best possible smile for the cameras. Musgraves has never been the world’s biggest smiler in a genre where grins are supposed to come naturally, so I couldn’t help but laugh as her attempt at one became more and more forced as the minutes stretched on and the photographers kept yelling “Over here, Kacey!” She’s not at all ungracious, but that effusiveness just isn’t her, and so she was never destined to be the queen of the grueling morning-show radio tours that country success demands. But in response to some programmers’ idea that she seemed a little chilly, I would only offer up, in response, the warm heart that beats throughout the entirety of “Golden Hour.”

It’s an album that doesn’t have to fake a smile to set you aglow with the saving power of love, or just what it feels like to smoke or drink ‘em if you got ‘em on an evening when the company is good and everything seems right with the world, or even to laugh, with an unforced smile, when you get to the disco takedowns of “High Horse,” the albums biggest anomaly. It’s the work of an artist, not a glad-hander. And ultimately, I think even most country radio people were glad to listen to it on their own time, even if their attitude was “Too bad we can’t play this.” TV, fortunately, is happy to pick up where radio left off.

Both of the non-single “singles” that were offered up as tokens when “Golden Hour” came out are up for Grammys: the rueful “Space Cowboy” is nominated for best country song, and the joyful “Butterflies” is in the running for best country performance. The album gets its fourth nomination for being up in the best country album category. It’s hard to say how she’ll do in the categories where she’s up against Chris Stapleton, another beloved maverick; Best Country Song, at least, where Stapleton mysteriously failed to field an entry, seems like a shoo-in for Musgraves. But even if she doesn’t win a thing, the multiple nominations and acknowledgement in the most prestigious all-genre category feel like a vindication for everyone who’s believed in her since the beginning — and happy proof that a successful career, like an engaging, subtle personality, and like her buzz of choice, can be a slow burn.