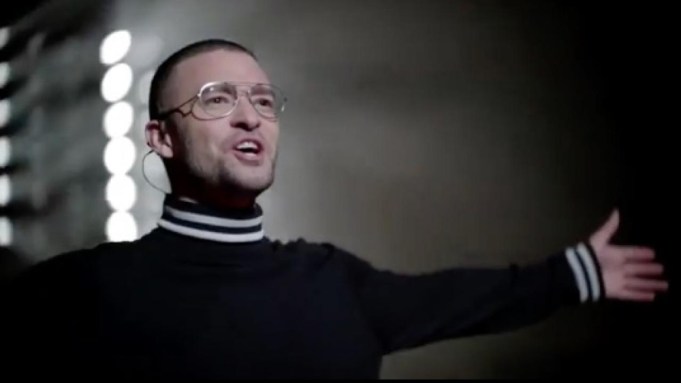 Justin Timberlake dropped the single and video for “Filthy,” the first song from his forthcoming fourth solo album “Man of the Woods” early Friday, and it’s safe to say that both are just about as far as possible from the pop-R&B flavor of his last single “Can’t Fight the Feeling” and 2013 double album “The 20/20 Experience” — not to mention the “southern American music” feel and outdoorsy vibe he described for his forthcoming album.

Instead, the song has a throbbing synthetic groove reminiscent of Daft Punk, shouted verses and a retro, electro R&B feel on the chorus. The video follows suit, set in an imaginary science demonstration in 2028 where hipster mad-scientist Timberlake is showing off his robot creation — which is a hell of a dancer. “This song should be played very loud,” he Tweeted when the song dropped. Watch it below.

This song should be played very loud. https://t.co/qu4XwWPUIm

Timberlake announced  “Man of the Woods”  via a minute-long video posted Tuesday on his social media accounts. The album is due Feb. 2 — two days before his halftime performance on the Super Bowl on Feb. 4.

“This album is really inspired by my son, my wife, my family, but more so than any album I’ve ever written, where I’m from — it’s personal,” he says in the video, which is filled with shots of Timberlake in outdoors settings. In other shots he is seen working with Pharrell Williams, who says “It feels so earthy, it’s just where you are in your life right now,” before adding emphatically, “That is a smash,” presumably about a song. Snippets of two or three new songs play in the background during the video.

While the wintery scenes contrast with Timberlake’s upbringing in Memphis, Tennessee, he has been saying for some months that the album, on which he also worked with longtime collaborators Max Martin and Shellback (with whom he collaborated on his last single, the hit “Can’t Stop the Feeling” from the movie “Trolls”) and Timbaland, reflected his roots, calling it “Southern American music.”

Timberlake’s halftime performance during the Super Bowl is set for Sunday, Feb. 4 at Minneapolis’ U.S. Bank Stadium. Variety reported that he was the frontrunner on Sept. 27.