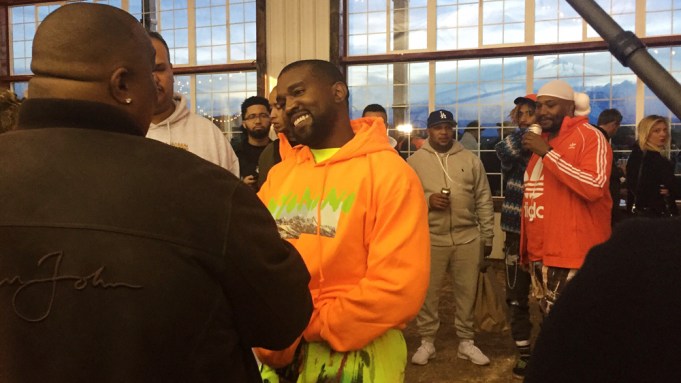 JACKSON HOLE, Wyo. — “After all this,” said one fellow traveler as we walked off of our unexpected Gulfstream G400 private jet to Wyoming for Kanye West’s album-listening event, “we gonna HAVE to say the record is fire!”

While that doesn’t begin to unpack the mixed feelings many people brought to this luxurious adventure, centered around an artist whose comments have made him highly controversial if not distasteful to some, it’s also a useful framing device for Thursday’s scenario: When you’re flown out to a ranch in the middle of Wyoming, wined and dined and given plush accommodation while surrounded by a near-TMZ-level hitlist of celebrities, it’s difficult to objectively assess an album purely on its artistic merits. Thus, this article is about the event rather than ‘Ye the person and artist — he didn’t address the crowd at large at all — or “Ye,” the album. (Update: Sources tell Variety that after the party, co-producer Mike Dean went back into the studio to do more work on the album before it was sent to streaming services in the wee hours of Friday. Also, the album’s cover photo was apparently taken early Thursday evening, en route to the party.)

And what an event it was: Baller travel aside, the party was held at a beautiful ranch, with snow-capped Rocky Mountains as a backdrop and a dozen horses in a pen next to the giant speakers set up in a circle inside where the listening would take place. The attention to detail was top-notch: Wait staff eagerly offered a variety of drinks, there were several fully stocked bars and flowers on every table, guests served themselves from ample and delicious barbeque, and there was a who’s who of celebrities and media, radio and musical luminaries in an unexpectedly approachable setting: Jonah Hill, Nas, Chris Rock, Pusha T, Lil Yachty, Kid Cudi, Ty Dolla $ign, Fabolous, Teyana Taylor and many others maybe weren’t totally psyched about posing for selfies or conversation with star-struck strangers, but they rolled with it and generally seemed to be in relaxed party mode, if understandably a bit guarded considering how accessible they were. Mrs. West, aka Kim Kardashian, fresh from her summit on prison reform with President Trump, was also in the house but protected by an imposing bodyguard. (For a play-by-play and photos from the event, head here.)

Yet what was actually most impressive was the fact that the event happened at all. The idea was first hatched by West last Friday — the beginning of the three-day Memorial Day weekend — and by Thursday afternoon approximately 500 guests were present at this near-flawlessly staged event, from nearly all corners of the globe, at a ranch in the middle of Wyoming.

“A lot of people pulled together to make this happen,” said a source close to the situation late Thursday night. “We found out this was happening Friday, and nobody stopped working over the holiday weekend. Multiple event people coordinated the logistics, and things started coming together Tuesday. People were flown in from Australia, Japan, Hong Kong, Singapore, Germany, Italy, France, the U.K. and all over the U.S. — radio programmers, press, DJs.”

The invite list was originally 300 people, another source said, but was quickly whittled down to 150. And when it was realized on Thursday morning that there might not be enough room for all of the guests on the chartered jet flying from New York to Jackson Hole, our Gulfstream, which had been tentatively reserved via STAjets, was confirmed and ready.

However, the source stressed, “This was a Kanye production — we were all invited guests. His team did the bulk of organizing, particularly the event planners MVD — which is run by sisters Massah David and Miatta David Johnson — and John McGuire, who is the architect of Kanye’s tours, including the floating stage, who brought in the sound system. Having said that, there were some pretty heroic efforts, including Def Jam’s international and promotion staff, and Mike Dean and Scooter Braun’s team were very much in the mix.”

It’s worth noting that although Braun — who is no stranger to enormous and quickly organized events, as evidenced by his pivotal role in last year’s One Love Manchester benefit concert — had officially stepped down as West’s manager back in April, he and his staff were clearly an integral part of the staging of the event and the album; West and Braun were side by side for much of Thursday evening.

“One other thing to note,” the source added. “[Def Jam] launched an online merch store in partnership with [Universal Music’s merchandising company] Bravado, and blew through half a million dollars of Wyoming merchandise in 25 minutes — 25 minutes!”

To pull together such an event in just six days — only three of which were technically work days — was a Herculean feat that clearly cost millions of dollars as well as the considerable efforts of the people and companies mentioned above, and especially event sponsor WAV, the South Korean company for which Loud Records founder and West associate Steve Rifkind is head of talent. Notwithstanding the considerable baggage surrounding the artist and the album, the event was truly one of the most impressive we’ve ever attended in decades of music-biz throwdowns.