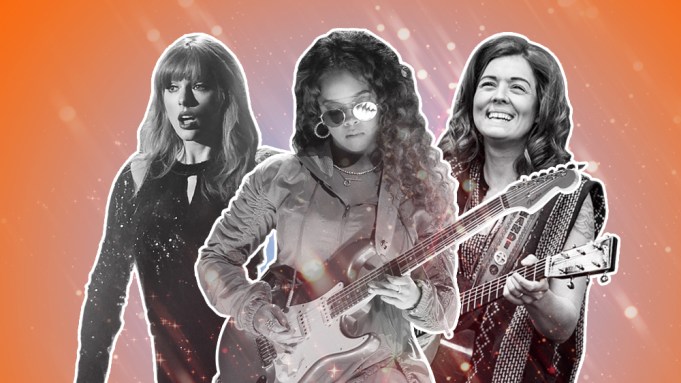 Every year, in the hours after the nominees for the Grammy Awards are announced, howls of outrage can be heard across the globe. “He/She was/They were robbed!” “Who is he/she/they?” “This is BS!” The ranks of the disgruntled are endless.

While the winners are a whole other conversation, it’s fair to say that the Grammys’ list of nominees has become increasingly and impressively diverse in recent years, at least when one considers the fact that the awards aim for consensus and thus are, by nature, “middle of the road.” With all of that in mind, they never lose their ability to surprise, and there is no shortage of surprises and snubs in this year’s nominee list.

Brandi who? H.E. who?
There’s little question that the biggest surprises are the big looks for veteran singer-songwriter Brandi Carlile — who has a whopping six nominations, second only to perennials Kendrick Lamar and Drake — and R&B newcomer H.E.R., who has five, along with superstars Lady Gaga, Cardi B and Childish Gambino. While both saw their number boosted with genre categories, both are up for Album of the Year; Carlile is also up for Record and Song of the Year and H.E.R. for Best New Artist.

Kacey is still country
Just a few years after Taylor Swift publicly transitioned from being a country artist to a pop artist, we see Kacey Musgraves making a similar move with her “Golden Hour” album, but still has nominations in the country category — something that did not happen with Swift’s “1989.”

Rebellion in Best Music Video
Interestingly, the most politically outspoken category is probably Best Music Video: We have not just two expected nominees — Jay-Z and Beyonce’s “Apesh—“ and Childish Gambino’s “This Is America” — but also Janelle Monae’s wildly same-sex-centic “Pynk,” newcomer Terra Whack’s “Mumbo Jumbo” and rapper Joyner Lucas’ “I’m Not a Racist.” Incidentally, all of the nominated artists in this category are people of color.

Many Best New Artist nominees are actually new!
The four top categories (Best Album, Song and Record of the Year and Best New Artist) were all expanded from five nominees to eight, and the change is most obvious in Best New Artist. There, along with widely recognized artists like Dua Lipa, Bebe Rexha and Greta Van Fleet we also have H.E.R. (see above), young R&B duo Chloe x Halle, country singer Luke Combs and 21-year-old British R&B singer Jorja Smith, who is quite famous in her home country but considerably less recognized in the U.S., despite rapturous reviews (including one from Variety). Oddly, however, there are no rappers in the category.

SNUBS
Taylor draws a short straw
There’s little question that the biggest snub goes to 10-time Grammy winner and 31-time nominee Taylor Swift, who has just one nod for her controversial “Reputation” album — even Bradley Cooper, nominated twice for “Shallow,” his duet with Lady Gaga from “A Star Is Born,” has more. While the album definitely challenged some longtime fans with its more-controversial music and tone, this may actually reflect a move for change within the Academy’s nominating committees, as Swift has dominated the Grammys in many past years.

Soundcloud/Emo rappers shut out
However you want to term it, the emo/Soundcloud rap associated with artists like Juice Wrld, Tekashi 6ix9ine, Lil Pump and the late XXXTentacion and Lil Peep has been the fastest-rising genre of recent years — yet those artists are completely absent from this year’s nominations, and no rappers at all are up for Best New Artist.

Just two nods for Ariana, Camila, Dua, Bebe
A wave of young female pop singers has hit the charts in recent years, and four of the leading lights are Ariana Grande, Camila Cabello, Dua Lipa and Bebe Rexha. Yet each has just two nominations, generally in pop categories, where many were predicting Best Album or Song or Record nods. It is especially surprising to see Grande and Cabello shut out of the big categories, as both had No. 1 albums and ubiquitous singles this year, particularly Cabello’s smash “Havana.”