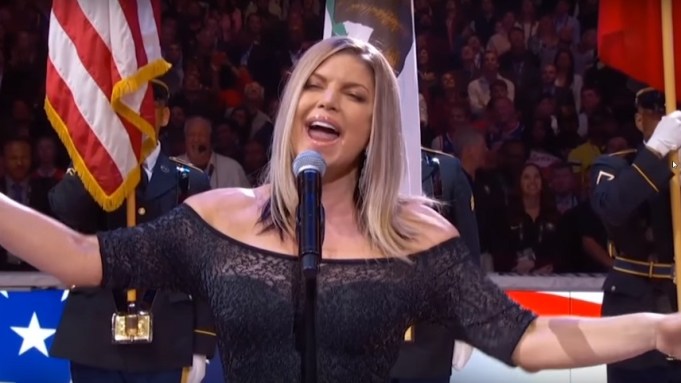 Was there collusion, or was this unilaterally sprung upon an unsuspecting America by an outside enemy bent on sowing discord and chaos? We’re speaking of course, of the scandal of Fergie’s Sunday night performance of the national anthem, which caused the entire All Star Game-watching public to immediately form a social-media grand jury, intent on wondering: What the NBA and TNT know, and when did they know it?

It wasn’t the worst televised national anthem ever — maybe just the worst not to actually be intended as comedy. (Your gold medal will always be safe, Roseanne Barr.) Or maybe we shouldn’t be quick to assume that her intent was serious, but there is little in Fergie’s past oeuvre to suggest that the kind of waggish impulses that would lead someone to deliberately do a sexy sendup of a nation’s most sacred ballad. Yet it played out for laughs; watch the video and see the players increasingly struggle with whether to smile or not, before finally Jimmy Kimmel gives the wide grin everyone has been waiting for.

But what was she thinking? A few theories come to mind (although, to be honest, none of them could really fully account for what basketball fans witnessed Sunday):

— Maybe she was determined to be the anti-Pink. Just last month, Pink got a huge number of plaudits for her straightforward version of the anthem at the Super Bowl… performed under the influence of the flu, no less. But Fergie may have taken note that no one was really still buzzing about it a week later and determined to give us all something to talk about. Mission accomplished.

— Maybe it was an homage to Marvin Gaye. The soul great is still remembered for his strangely slinky version of the anthem at the 1983 NBA All-Star Game, so perhaps this was Fergie’s 35th anniversary homage. But at least Gaye was subtle enough in his reading of Francis Scott Key to leave some plausible deniability about whether he was actually trying to inject some sexual healing into the battlefield anthem. Also, Gaye kept the eccentric performance low-key and was never in danger of getting out of his vocal comfort zone. Fergie went off the reservation almost from note one.

— Maybe she meant to pull a Pfeiffer. Fergie’s current hairstyle is somewhere between a Jennifer and a Barbra, but there was much about her manner that made it seem as if she were actually doing some sort of implicit homage to Michelle Pfeiffer’s rendering of “Makin’ Whoopie” in “The Fabulous Baker Boys.” If she had crawled onto a piano about the time she got to the twilight’s last gleaming, it would have made a lot more sense.

— Maybe it was part of a leftist conspiracy to make the nation take a knee. You could imagine progressives and conservatives united in taking an involuntarily supplicating, “Please make it stop” position. If it’d been successful, that would have been the perfect moment for the pro-kneelers to rush in with a “Gotcha!” Admittedly, Fergie has not appeared to be all that radical in her politics until now, but that’s the very nature of sleeper cells.

— Perhaps Fergie believes she is a straight-up, legit jazz singer. This is, admittedly, the most outlandish of all the theories presented here. But it does seem as if she might be asking herself “What would Ella sing?,” even though her stylization ultimately seems less Fitzgerald-ian than like Marilyn Monroe suddenly taking “Happy Birthday, Mr. President” in a screechier and scarier direction.

There’s never a good time for a bad performance, but the timing is especially inopportune: Even if she’d pulled it off, you might also wonder why anyone (including the producers and execs who presumably heard this arrangement ahead of time) thought it was a good idea to have a sexy national anthem at the end of one of the more somber weeks in America’s recent history.

But the all-around inappropriateness definitely makes you wish Fergie were a mentor on Fox show “The Four,” and not just its host. Can you imagine the advice she’d dole out to aspiring singers? (“Your ‘Hallelujah’ is okay, but you really need to give it the full Bolton.”) In an era when Pink plays the anthem for subtlety and even our music competition shows have arguably gotten a little too tasteful for their own good, a fully unleashed Fergie might be the blast of unfresh air we all need.