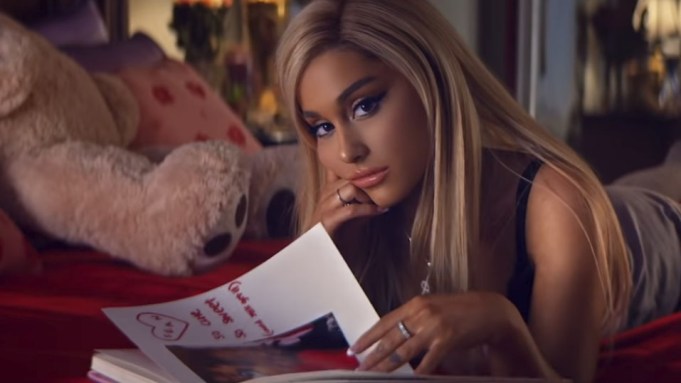 Four days after teasing out a clip of the music video for her latest single “Thank U, Next,” Ariana Grande has delivered in spades. Now it’s finally here, in all its early 2000s movie reference glory, complete with homages to classic romantic-comedies and countless subtle nods to pop culture sprinkled throughout.

Here are all the references we’ve spotted so far:

YouTuber Colleen Ballinger (Miranda Sings) boasts, “I heard that Ariana was pregnant, so I got pregnant so we could be pregnant at the same time.” A few frames later, the original “army pants and flip flops” actress Stefanie Drummond says, “Ariana broke off an engagement, so I found a guy to propose to me, and I broke off an engagement.”

Jonathan Bennett, the original Aaron Samuels, and pop artist Troye Sivan both make appearances, followed by a joint Grande/”Mean Girls” reference made to Grande and Pete Davidson’s matching “H2GKMO” tattoos when YouTuber Gabi DeMartino says, “Ariana says ‘Honest to God, Knock Me Out,’ so I decided to punch myself in the face. It was awesome.”

The next scene reveals some juicy details in the form of Grande’s own Burn Book. There are pages for each of Grande’s ex-boyfriends, including Big Sean, Ricky Alvarez, and Pete Davidson (Davidson’s page reads “sorry I dipped, I love u always”) — except for the late Mac Miller, who is mercifully left out of the Burn Book presumably as a sign of respect.

Grande’s “Victorious” co-star Elizabeth Gillies makes an appearance as the Cady Heron to Grande’s Regina George as they march down the hallway.

Ballinger makes a crossover from the “Mean Girls” universe to the “Bring it On” universe as a pregnant cheerleader, wearing a uniform that says TUN, a nod to the song’s title. And of course, there are Clovers and Toros having it out.

Next, Grande embodies Jennifer Garner’s character from “13 Going on 30,” expertly synching the song’s “when I walk down the aisle holding hands with my mama” line with the moment when Jenna walks away in tears from Mattie’s wedding holding the dollhouse he made her. With a flurry of wishing dust, we’re transported to another universe…

This time Grande plays Elle Woods, complete with one of her seven dogs, Toulouse, playing Bruiser. Grande also makes a surreptitious political reference as she peruses a textbook titled “Immigration and Refugee Policy.”

Jennifer Coolidge appears back in her original role as Paulette, chatting with Grande in the nail salon. A few references to the Pete Davidson’s “Big D— Energy” meme are made as Grande gossips to the oblivious Paulette, “He was really cute, and it was really big.”

Finally, the UPS Guy steps into the shot for the “bend and snap” lesson, (though sadly not played by Bruce Thomas) with a patch on his uniform that reads “BDE.”

With a final middle finger to the camera from Grande, Kris Jenner closes out the video as the cool mom, shouting, “thank u next, bitch!”