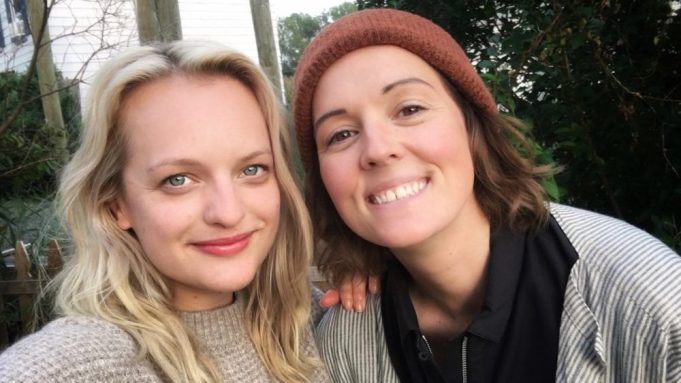 Brandi Carlile has some famous friends, and they seem to especially love her song “Party of One.” Recently Carlile released a duet version of the tune in which she’s joined by Sam Smith. Now, actress Elisabeth Moss has starred in and acted as “creative director” on a video for the original version of “Party of One,” the closing number of the album “By the Way, I Forgive You,” which last week got Carlile an unexpected six Grammy nominations.

Although there’s some domestic turmoil portrayed between Moss and the other woman in the video, co-star Nicole Dissan, the set of “Party of One” was a handmaiden’s impossible dream come true. Above and beyond the artist and the video’s small cast, its director, producer, two executive producers, line producer and cinematographer are all women.

“When I thought about making a video for ‘Party of One’ I couldn’t stop picturing Elisabeth’s face. I believe she is the absolute best actor out there right now,” Carlile said in a statement. “No one has ever impacted me so much without saying a word. … I sent Elisabeth a letter and she called back and suggested creating a love story about two women and using a female crew. A brilliant group of women are responsible for every part of this incredibly human love story, and I’m more proud of it than anything visual I’ve ever done.”

In an August concert at L.A.’s Greek Theatre that was reviewed by Variety, Carlile described the song as being the answer to “if you ever want to know what would happen if you had a catastrophic fight with your spouse and then you stayed up all night getting drunk and listening to Joni Mitchell.” In talking about the new video, Carlile elaborated on how personal the song is to her.

“Writing ‘Party Of One’ was a cathartic way out of one of my longest nights,” said the singer. “Marriage equality was never a part of my story growing up. It is still a new concept, even to me. I think that after being told for long enough that being married isn’t something you’re worthy of, you fight that deep down demon in a way you can’t recognize until things get really hard. I think there is profound determination inside of all of us to prove to the rest of the world that we can make love last and weather the storms, just like anyone else. At the end of the day, marriage means something to me. We are witnessing an entire generation gaining access to a basic civil right and all of the passion and responsibility that comes with it.”

Said Moss, “I had accosted Brandi when we were both on ‘Ellen’ because I had been obsessively listening to her cover of Bryan Adams ‘Heaven’ to help me prepare for a cover I had to do it of it for the movie ‘Her Smell.’ When she sent me this song and asked me to be involved in the creation of the video shortly afterwards. I said yes immediately after I listened to the track because I fell so head over heels in love with it. It’s one of the most beautiful musical pieces I’ve ever heard, right down to the string arrangement at the end.”

That arrangement is the work of the late Paul Buckmaster, who completed it for Carlile shortly before he passed away. Buckmaster is most famous for his work with a young Elton John; a not-as-young Elton John just named “By the Way, I Forgive You” the best album of 2018.

The song’s Joni Mitchell influence is as palpable as Carlile herself declares. She recently spoke with Variety about Mitchell’s influence on her recent songwriting, in advance of her appearance at a 75th birthday tribute show at the Dorothy Chandler Pavilion, at which she was viewed as the knockout winner by near-unanimous acclamation.