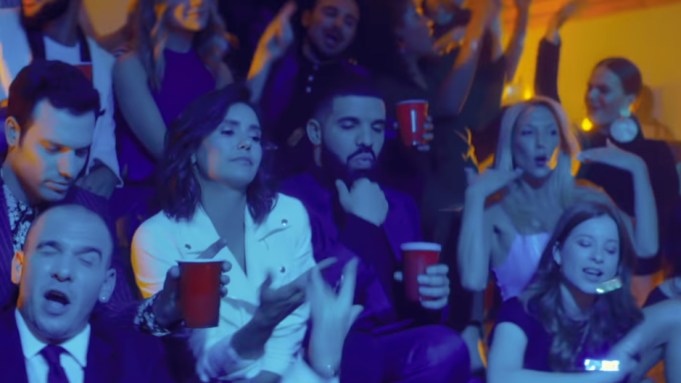 Drake’s former castmates from “Degrassi: The Next Generation” had a blast reuniting for his latest video, “I’m Upset,” shot this past weekend in downtown Toronto from the Air Canada Centre, where the rap star’s beloved Raptors play basketball, in addition to the Degrassi set in north Toronto, where the long-running teen drama still films.

He released the video Wednesday night and it already has more than 2.5 million views on YouTube.

From 2001 to 2009, Drake, then known by his birth name Aubrey Graham, played Jimmy Brooks in the series, a rich kid who ends up in a wheelchair after getting shot.

For the video, directed by recent Prism Prize winner Karena Evans (“God’s Plan,” “Nice For What”), Drake — inexplicably sleeping on a bed at the Raptors’ centre court at the ACC — gets a calendar reminder on his phone about a high school reunion and sets out in his yellow Ferrari with Shane Kippel (a.k.a. Jimmy’s friend Spinner) as his passenger.

Turns out it’s for the class of 2007 at Degrassi Community School. “Welcome Back,” reads the sign, and the party and mayhem ensues.

“There was no acting going on in that video,” Jake Epstein, who played Craig Manning, a photographer turned rocker and one of Jimmy’s best friends, tells Variety. “It was truly a reunion of great friends who hadn’t seen each other in years. Drake’s team and Karena did a fantastic job of orchestrating the whole thing.”

“It was the most incredible and layered experience,” adds Kippel. “An homage to the show that shaped all of our careers. … Unforgettable.”

“Degrassi” executive producer Stephen Stohn, who last saw Drake at the Juno Awards in 2010, popped into the set for an hour to see everyone on Sunday. His wife, Linda Schuyler, created the long-running franchise in 1979, and he just released a book titled “Whatever It Takes: Life Lessons from ‘Degrassi’ and Elsewhere in the World of Music and Television.”

“Back in the day, working with all these wonderful talented people was the highlight of my life; and to revisit those times, and meet up on set with them again, has been an awesome dream come true,” Stohn tells Variety.

“It was the reunion we’ve always wanted, and we were thrilled to do it with our old friend,” Collins, who played the bisexual Paige Michalchuk on “Degrassi: The Next Generation” and once kissed Jimmy, tells Variety. “Truly the best night — thank you Aubrey, and thank you to the unbelievably dedicated fans of our show.”

Says Ruggiero, who played Marco Del Rossi, a gay teen and the best friend of Epstein’s character: “Drake brought us all back together on our home turf. And there is no better way to celebrate a high school reunion.”

Love for Aubrey was shared by Melissa McIntyre, who played Ashley Kerwin, Jimmy’s on-again, off-again girlfriend. “It was like coming home except home isn’t home anymore,” she says. “In that sense it was really strange but it was so incredible to gather as adults and do the ‘who are you now?’ chats and get to know each other again. None of it would have happened without Aubrey. It was an incredible gift.”

“We laughed; we cried; we had the best time,” says McDonald, who was the main protagonist Emma Nelson on the show: “I am so proud of how far each of us came from when we first walked those hallways 17 years ago.”

Adds Nina Dobrev, who played teen mom Mia Jones: “Getting to roam the halls of Degrassi after over a decade was surreal and bittersweet. Couldn’t be more grateful to Aubrey for reuniting us one final time as adults and throwing the party that our teenage selves could only have dreamt of. We’ve come a long way brother… love you.”