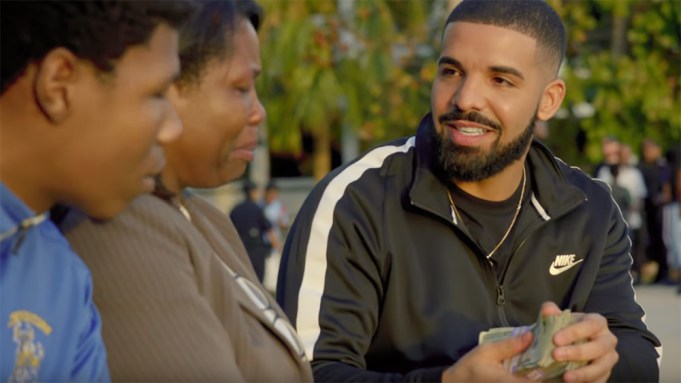 In the video for “God’s Plan,” released Friday, the rapper gives away almost $1 million to the Miami community, with the introduction announcing, “The budget for this video was $996,631.90. We gave it all away. Don’t tell the label…”

Throughout the video, Drake can be seen giving out a $50,000 scholarship to a University of Miami student, $50,000 to a women’s shelter, $50,000 to a youth center, $25,000 to after-school programs, $20,000 to the Miami Fire Department, and $10,000 to UM’s school of music. In addition to the significant donations, he donates new cars to Miami families and hands out stacks of cash to a few mothers and their children, telling them, “We’re nothing without our mothers, so thank you.”

The rapper even walks into a grocery store and announces, “Anything you guys want in the store is free, you can have whatever you guys want,” as customers fill up their carts, and took kids on a mall shopping spree.

On Thursday, Drake teased the video with an Instagram post and called it “the most important thing I have ever done in my career.”

The most important thing I have ever done in my career…drop a 🙏🏽 if I can share it with you.