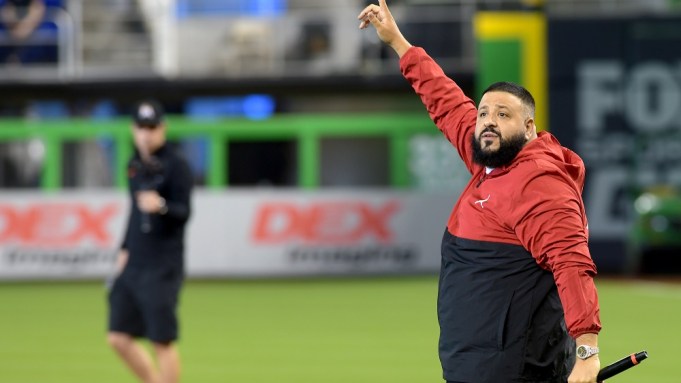 Hitmakers DJ Khaled and Jason “Poo Bear” Boyd recently teamed up for an anthem. No, it’s not a new single by Justin Bieber, but rather, a baseball banger: the theme to the Miami Marlins, “Just Gettin’ Started.”

The two performed the song, which was written with Jingle Punks’ Jared Gutstadt, Sasha Sirota and Kent Jones, on Opening Day at Marlins Park when Miami faced the Chicago Cubs (never mind that the Marlins lost). Marlins CEO Derek Jeter presided over the local activities.

“Derek Jeter wanted to have a song that represents all the different cultures of the city — pop, latin, urban — with an anthemic sports catch phrase,” Gutstadt tells Variety. “And from there, we sprung into action.  Poo Bear and I wrote the song in late December and slowly put the pieces together. … Poo Bear really led the talent procurement side of things by bringing in his amazing relationships with Nicky Jam, Kent Jones and DJ Khaled while Jingle Punks held the rein of clearing the artists, doing talent deals and collaborating with Poo Bear on the production.”

The night before the March 29 season opening, “Just Gettin’ Started” could be heard all over town, from local cluns to radio stations via a partnership with iHeartRadio. The final piece involved a dance mob grooving to the track at the park. “We captured that with crews that were on hand and merged it with some performance pieces to create this ‘Just Gettin’ Started’ content to really round out the experience.”

Watch scenes from Opening Day in the clip above.