Politics, shmolitics. His hit song, "Nevermind," is an undeniable jam. 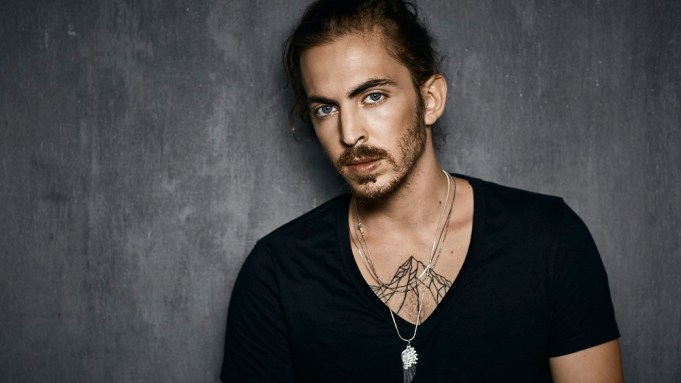 When it comes to the artist Dennis Lloyd, things are not always as they seem. Though his name suggests origins of the Anglo-Saxon variety, the singer, songwriter and multi-instrumentalist was born and raised in Israel; and while his look, and breakout single “Nevermind” suggest a life-long rocker, he has been playing trumpet since he was eight years old, studying at the Thelma Yellin High School of the Arts in Givatayim, outside of Tel Aviv.

Also unlike most artists to start in Israel, Lloyd has made the sort of headway in the west that’s difficult to attain thanks to the moody, mystical 2016 single “Nevermind,” which has garnered over 200 million streams on Spotify and has charted in multiple territories around the world. In June, he completed his first headlining tour of 16 cities across Europe and North America and in July he performed a rousing rendition of “Nevermind” on “Jimmy Kimmel Live!” Variety caught up with the Lloyd during a recent stop in Los Angeles.

Your real name is Nir Tibor, which is a beautiful Hebrew name. Why did you decide to change it?
First, I wanted something more catchy. Second, it’s a privacy thing. I am like the only Tibor in Israel, so it’s easier for my parents and everything [for me to go by a pseudonym]. But mostly I wanted to find something catchy and easy to process, and not have to explain that it’s Nir and not Neil. Nir means a field, like in farming. My sister’s name is Shir, which means ‘song.’ I was just a rhyme.

Do you think changing your name helped you to gain popularity as an artist outside of Israel?
It’s mostly about the persona that I bring. The fact that my name is Nir Tibor, it’s very Israeli, but I’m not hiding that fact in any other way. I’m not trying to fake it. You watch my interviews and I’m speaking about Tel Aviv and my life. I’m charting in Arabic places. I was No. 3 in Lebanon, and No. 100 in Palestine. In Qatar they are playing me on the radio. If they knew that I was Israeli, they wouldn’t even play me on the radio, but I’ve already reached their audience. The people got sucked into the music. It’s too late. I get messages from Iranians, from Palestinians, from everyone, saying like, man, we just found out you are Israeli and we are confused. We listen to you like for months and you’re supposed to be our enemy.

What’s the meaning behind the “Nevermind” song title?
My biggest idol, my biggest influences, have always been Nirvana and Kurt Cobain. Since I was 12, I had the poster of [the album] “Nevermind” over the bed. When I wrote my song, I said I want people to look up “Nevermind” on YouTube and Spotify and see me next to Kurt Cobain. What’s better that that?

You signed with a small label in Italy. From there it went to Warner Bros. Records Italy and then was upstreamed to WBR in the States. But it took a while. Why do you think it’s been difficult for Israeli musicians to break through in the United States?
The U.S. market is the biggest in the world. Just on Spotify you have, like, 20,000 new songs a week. I think maybe places like Germany and Italy are more accepting of processing the music in a different way. Maybe it’s easier to go to smaller territories and then go to the United States. I also think that maybe Israeli musicians are too scared to think outside of the box. There are so many talented Israelis — musicians and actors and everything. I’m hoping that with what I’m doing more Israelis will be exposed to the world. I’m opening this window for them.

What is your opinion on how Israel is portrayed by the media, both in America and around the world?
I have general thoughts about the media, in general. I think the media lies. The media never shows the full picture, on any topic, not only Israel. If you really want to know if it happened, go there and find out if it happened.

Critics have tried to describe your music in different ways, from ‘artistic music’ to ‘trance.’ How would you describe your music?
Genre-less. People try to market me as a dance artist but I am not. I don’t think that I am. I think people want to put me in a box. Everyone wants to put everyone in a box, just like they do in like relationships.

After you completed your compulsory army service in Israel, you moved to Thailand, which is where you wrote “Nevermind.” What was that like?
I just packed two bags and moved to Bangkok. One with my clothes, one with my studio. So when I moved to Thailand, I set up a studio apartment there, on the 28th floor somewhere in Bangkok. I did not live in a touristy place. I lived only around locals. It was crazy. I was the only one who spoke English. I had no WiFi. So I found myself sometimes 18 hours a day just sitting by the computer recording my music. I didn’t listen to any music. I took my trumpet, my laptop and my microphone. That’s how I recorded “Nevermind.” I was very lonely, so I wrote about that. It took me many years to find out how to mix the trumpet into my music and in Bangkok I finally realized how to do that.

What are you working on now?
I am working on the release of my next song, “Never Go Back.” It’s the story of ‘Nevermind’ continued. I recorded “Nevermind” at the beginning of my relationship [with my ex-girlfriend]. I met her in Laos in a youth hostel. We then spent three months in Bangkok, one month in the Philippines and then we moved to Israel for a year. “Never Go Back” I wrote after I ended the relationship.

How important is success to you? Do you care about your place on the music charts?
In Israel, I don’t do any interviews at all. I don’t want to be a celebrity in Israel. I have my family, my friends, my dogs ﹘ I want everything to be calm. I think that in a moment [fame] will happen anyway, but as long as I can postpone it, I will. I’m not a showoff. My happiness comes from very basic and simple things. I don’t even have the plaques in my house ﹘ the gold and platinum-selling plaques. I gave them to my parents and grandparents. It was never about the numbers, never about the money. It was always about the music. That’s all I care about.