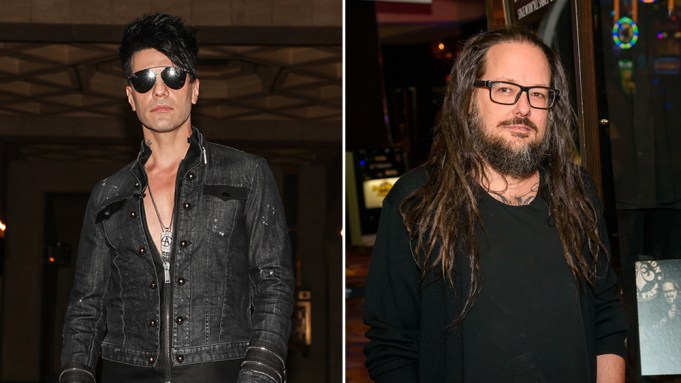 When illusionist and magician Criss Angel debuts the latest incarnation of his popular “Mindfreak” live show in Las Vegas later this month, he’ll do so with a little help from musician Jonathan Davis of the nu metal band Korn.

The eccentric men have been pals for many years now, and Angel has featured Davis in his work whenever he could. The singer appeared in a couple of episodes of the popular A&E television show “Criss Angel Mindfreak,” which ran for six seasons from 2005 to 2010, and is also on the program’s official soundtrack. And, in 2012, the magic maker interviewed his friend for an episode of “Criss Angel Uncensored.”

Now they’ve teamed up for a special video that will be featured in the brand-new “Mindfreak production” — and Variety has an exclusive sneak peek of the creepy clip.

The disturbing video, which Angel directed, will be used in the show to introduce the audience to his crazy alter ego, Xristos. It is set to his favorite track, “Basic Needs,” from Davis’ debut solo album, “Black Labyrinth,” which dropped earlier this year.

The action takes place in an old attic where weird creatures exist. The psycho illusionist repeatedly tries to terrorize the rather calm vocalist by threatening his life with various weapons — including a gun, knife, and rope — as smoke, strobe lights, and confetti whirl around the room.

Angel also has a few nightmarish solo scenes in which a scorpion, a spider, a snake, and worms either come out of his mouth and/or crawl over his body. Clearly, this clip is not for those who easily get spooked.

The video just ends without any kind of conclusion whatsoever. However, for theatergoers attending “Mindfreak,” they are now in for some surprises from Xristos.

According to Davis, the song “Basic Needs” is about what he requires to survive. “I don’t need f—ing money, fame, or anyone to pat me on the back. Basic needs are all it takes,” said the 47-year-old.

Another one of the singer’s solo tunes, “What It Is,” is featured a few minutes later in the next segment of the 90-minute show.

Angel, who newly rearranged both of Davis’ tunes for his show, is happy to be returning to the stage in Sin City. “It’s amazing to be back home at Planet Hollywood, where I began ‘Mindfreak’ in 2005,” the 50-year-old six-time Magician of the Year said. “As that TV series changed the trajectory of magic on television, I believe my new show will do the same for live performance, creating a brand-new immersive experience that the world of entertainment has never had.”

‘Mindfreak’ opens at the newly-renamed Criss Angel Theater at Planet Hollywood Resort & Casino on December 19. The production will have more than 75 unique illusions — including 20 never-before-seen tricks — featuring cutting-edge technology, pyrotechnics, and LED effects. Additionally, there will be interactive lobby installations and memorabilia on display. Tickets start at $69 and are available through Ticketmaster or in-person at the box office.