'Coldplay: A Head Full of Dreams' will screen in theaters on Nov. 14 before heading to Amazon Prime Video. 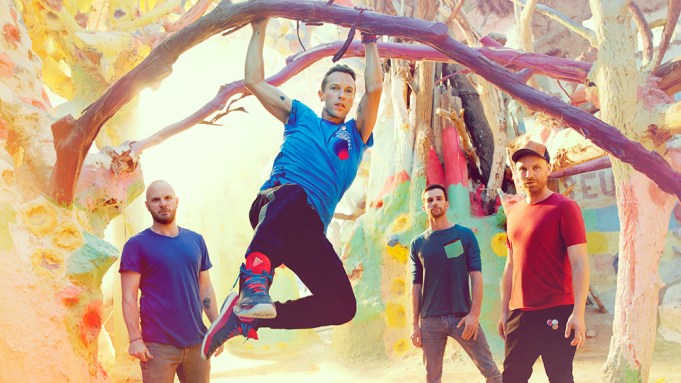 After following Coldplay around with a camera for 20 years, the footage Mat Whitecross carefully compiled of the beloved British band is finally about to have an audience. The documentary film “Coldplay: A Head Full of Dreams” will screen for one night only in theaters around the world on Nov. 14, before debuting on Amazon Prime Video on Friday the 16th. (Watch a snippet from the film in the video above.)

“I don’t think those four obviously could possibly have imagined what was going to happen to them,” Whitecross says of the band’s humble beginnings at University College of London, where Chris Martin, Guy Berryman, Jonny Buckland and Will Champion first met. Some of the earliest pre-Coldplay jams — when the band tried on other names for size, like Starfish — were captured on tape. “I was always filming everyone,” says Whitecross. “Gradually I think they just got used to me being around.”

Known for his directorial work on the Oasis documentary “Supersonic,” Whitecross says it took years for the band to come around to the idea of a film — this despite him having collected more than 1,000 hours of footage since 1999. In the end, it was Martin who gave the greenlight with a warning: “Go off and make whatever film you want to make. You have our blessing. But please don’t expect me to watch it.”

Martin is a sight to behold. In his formative days, full of blind confidence and boundless energy — even while still sporting braces — it didn’t matter if there were only three people in the audience. Recalling a gig at a remote farmer’s college in which Coldplay’s set got pushed back to two in the morning, Whitecross says he was astounded by Martin’s buoyant nature. “Chris, hours later, is waving his hands in front of the camera and talking about how they’re gonna be the biggest band the world after they’d just had the worst gig of all time.”

Few outside of the “drunk farmer” in attendance believed Martin at the time, but manager Dave Holmes says knew all along that Coldplay would go down in history. Speaking to Variety, Holmes recalls giving his mother a copy of Coldplay’s 1999 debut “Parachutes.” Says Holmes: “I told her, ‘I just started working with this band, and they’re going to be as big as U2. I knew it. I just knew.”

Holmes was also one of the few who understood Martin’s “crisis of confidence,” as Whitecross describes a sort of insecurity/defense mechanism/humble-brag the singer continues to employ even today. Back at University, “I was heading to some lecture and I bumped into Chris in the corridor,” Whitecross recounts. “He was holding a guitar, and he’s, like, ‘Come with me, come with me,’ and he grabbed me and dragged me into one of the bathrooms…and he played this tune that I’ve never heard before or since.” After he’d finished, despite Whitecross’ praise, Martin exclaimed, “I knew it! Sh—! F—! I’m talentless.”

On the other hand, Whitecross reasons, it’s kept the fame from going to Martin’s head. “He always has this devil on his shoulder, kind of second-guessing and telling him they don’t deserve it. There’s something beautiful and charming about that.”

“If he wasn’t a professional musician, I think he would have been a professional athlete,” Holmes says of Martin. “He’s the driving force in our organization. He’s the engine.”

It’s their dedication to the music, says the veteran manager, that has kept the band together all this time. “[For] the whole band, it’s not about ticket sales or grosses or anything. It’s about, ‘Let’s make the greatest show of all time,’” Holmes says, hinting that the band is on track to release a new album sometime over the next year, followed by a tour.

As for “Coldplay: A Head Full of Dreams,” the hope is that it will show audiences “a side of the band you probably don’t see,” says Holmes. “Their camaraderie and that bond that you can sense back then still exists to this day.”